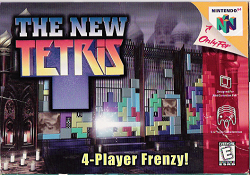 The New Tetris is one of way too many interpretations of Tetris. It attempts to take the old concept of Tetris that really is quite timeless and add a, as the title suggests, a “new” twist to it. We see if this new twist is worth looking at.

Tetris clones are really nothing new. Still, there have been numerous attempts to try and revamp the concept of Tetris in new and exciting ways. In this particular instance, the idea is that lines go towards building the seven wonders of the world. That’s what this 1999 version attempted to do.

The technical side of it is that the player accumulates lines not just within each game for a higher score, but also how many lines that is earned through the course of the player playing multiple rounds of Tetris. If a player clears a certain number of total lines, one of seven wonders will be unlocked. If the player earns 500,000 lines total, then the game is won and all seven wonders are unlocked.

What was tried in this version is that if one were to create a four by four block with four Tetris pieces, the player can create a special block. Silver blocks are earned when four Tetris pieces of any configuration can fit into this block. A gold block can be earned if the player can create that block by using nothing but the same Tetris piece. Creating the blocks alone won’t do anything other than create a cool animation as the pieces fuse together, but if the player can clear it off the board again, then the player can earn multiple lines for clearing what would otherwise be simply four via a Tetris. For example, Tetris two gold blocks and you earn a whopping 85 lines total. This, of course, is the most lines you can earn by dropping a single piece in the field.

Another aspect of this game is the spin move. If you can rotate a piece as part of a way to create a line, all the pieces either above or below will become single one by one pieces and fall down – clearing plenty of lines in the process if you are close to the top.

There is also the inclusion of storing a piece. If the piece you are given isn’t what you want, you can always swap it out with whatever other piece is in the storage. This is great if you get a four by one line piece with hardly anything else on the field and want to make a Tetris later on. Another use can be to buy yourself an extra second as you find a better place to drop the piece – useful when the pieces start falling faster.

As one progresses through the game, more backgrounds and music can be unlocked. So, for example, if a player completes the necessary 2,500 lines to complete the Mayan wonder, they are treated to a scenic flyby animation as well as some facts about the wonder in question. After that, a new Greek background opens up to add variety instead of simply playing the game with the same backgrounds over and over again. After completing a few wonders, earned backgrounds and music are randomly cycled through as each round is played.

There are various modes of play. Marathon is, of course, the most classic version where the player plays until the pieces simply fall too quickly and the player goes over the top threshold of the playing field. There’s sprint which is a timed mode. Survive for 3 minutes and win the game while trying to earn as many lines as possible within that time limitation. Ultra sets a goal of a certain number of lines and it’s up to the player to earn that number of lines as quickly as possible.

There is also the option to play against a computer player. If the player wins, the total number of pines cleared by both players go to constructing the next Wonder. There is also a four player mode which opens up a few more modes of play for up to four players. Three and four player modes are only for human players though. A slight oversight in my opinion.

For single player mode, I found that things get rather repetitive rather quickly. The reason for that is because when you are trying to earn that first wonder, you are stuck with the same single background for a while. While it is more than possible to simply blow through that first line goal and earn a second background, you eventually learn to get tired of seeing that same background over and over again. If you earn two wonders, you’ll occasionally “roll” the first background and find yourself going, “Oh, that one again. Ugh.” I think what would have really helped in this instance is to do what was done with the music. The music can be varied for the player. While it’s only a small portion to what the player is offered, there is still a nice variety for the player to enjoy as the lines are pounded out. I think that if the game had the same number of backgrounds to start with as with the music, the dullness in the beginning of play would have been reduced or removed altogether. What kind of backgrounds might have worked? A forest, a sandy beach, a desert, an island, you know, generic stuff to tide the player over for the new and interesting backgrounds as each of the newer backgrounds are earned. Two backgrounds barely do it after 2,500 lines. Once there is about four or five backgrounds, then that starts breaking up the thematic repetition. By the time you get there in this game, you are already wore out on most of those backgrounds. It’s an interesting concept to introduce new backgrounds and music as one progresses through the game, but I think it could have been better executed.

Another flaw in this game that I’ve seen from other critics is the number of lines needed to progress. The number of lines to earn the second to last wonder is 250,000. The last wonder is a massive 500,000 line requirement. Even with the different ways of earning more lines than your standard Tetris game, this still would take seemingly an eternity. By the time you even get to 100,000 lines, the game stops being fun and simply a boring routine that has you looking to other games to make the day fun again. The only challenge really appears in marathon when you are several hundred pieces into a round and the pieces start falling at a faster pace.

Still, I can’t say this was a horrible game either. The unique elements of spin move’s and silve and gold blocks offer an interesting element in this game. The smooth falling pieces and the fact that one can easily rack up a few hundred lines before pieces start falling at a challenging pace offers a certain thrill as well. All the wonders can be earned regardless of level of skill. Player skill really only affects the number of rounds needed to complete each wonder.

Then there’s also the mysterious ranking system. While common sense would suggest a rank of 1 would mean the player is doing really good, a rank of 30 is actually what is considered a good player. While an interesting number, this is ultimately a rather pointless feature. Some guides suggest that rank is determined by how many lines you can create on average. So, if you get 50 lines from busting apart blocks, your rank will go up, but if you get a whole bunch of single lines in a row, your rank will fall. In the hours I spent playing this game, this didn’t necessarily appear entirely true. While playing sprint, I found that the higher the number of lines I get, the better the rank. I then applied this to marathon and the same appeared to be true. It’s really the number of lines one get’s on average every 3 minutes. So, if one get’s 20 lines, the player’s rank will move towards the 20th rank. The other element that is affected by the rank is past performances. I’m not sure how many rounds the game goes back, but it seems to take an average over the course of several rounds and puts that towards the overall rank. If you get two rounds that would put your rank at 5 and a round that would give you a rank of 10, your rank might be somewhere around 6 or 7. The formula seems to be every 10 lines you get in the span of 3 minutes moves your rank up one. So, if you get 50 lines in 3 minutes, you’ll get a rank of 5 on the first round. The maximum rank you can earn is 30 and I’ve earned that numerous times. It’s really a useless and trivial thing, but that seems to be how it works. I don’t know this for a fact, but this is what I’ve observed over the course of playing this game.

Graphically, this was a decently done on the gameplay front. There is the Egypt backgrounds that offers some highly detailed imagery to set the stage for the actual Tetris game itself. Once a wonder is completed, the player is treated to a scenic tour of what their hard work created. The tours themselves were, well, basic and nothing too special most of the time. This is compared to other games released at the time in general. The tours were there and added something interesting, but the same gameplay music was used to run in the background during the tour. It had the feeling of the wonder completion being an afterthought when the game was made.

The sound, on the other hand, was probably the biggest highlight of the game. The music worked extremely well with the game. It offered that ethnic feel while also infusing it with modern synthesizers to give a really nice experience. The sounds used to make the fusing of pieces whenever a large block was earned or the sounds whenever a block was placed was also very well done. There’s a lot going on in the sound department that gives the game incredible depth and atmosphere. So, very well done there.

Overall, this game is an interesting one to play. Unfortunately, after a few hours of game play, the game get’s a little repetitive. The only way this game stays interesting is if one were to go for overall high scores and personal challenges, but that’s about it. By the time one earns the Egypt Wonder, the overall gameplay really starts to drag. How far you get in the game depends on how much patience you have for grinding type games. I don’t think very many people managed to earn the Russian wonder simply because the goal is way too high. So, fun game to play at first, but one of those games you’ll probably never complete.

Furthest point in game: Obtained Celtic wonder, but gave up trying to obtain the African wonder.