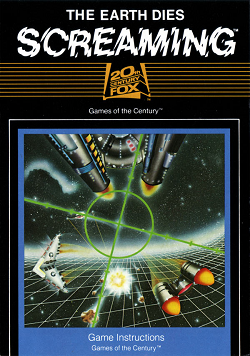 In this review, we check out the first person shooter game with the curiously titled The Earth Dies Screaming for the Atari 2600. We decided to see what this game was about.

The premise of this game is pretty straight forward. You patrol earth and, suddenly, you and the Earth are attacked by an alien invasion. You have to defend Earth from the invasion.

The idea behind this game is simply to see how long you can survive and how many enemies you can shoot down. There doesn’t appear to be any possible way of winning. The only thing to play for is a high score.

You only have the main weapon and the crosshairs auto aim for you. You can’t shoot the enemy shots. If you or the Earth blows up, you lose. The Earth can take less damage than you.

I found this game to be a bit depressing in that it’s impossible to win and there’s no real high score capability. Still, being able to play a first person perspective game made so far back in the day was interesting to say the least. I kind of wished this game wasn’t so short lived in that it’s more than possible to have your fill of this game in less than 15 minutes.

Graphically, again, it’s impressive that this is a first person perspective game. It’s able to simulate distance by shrinking enemies as they are further away. The radar was a nice graphical feature that allows you to form a bit of a strategy. Still, I found it weird that a decision was made to make the planet pink and maroon instead of, say, blue and green. Still, I’ll give a thumbs up to the explosions that lit up the screen nicely.

Overall, if you’re after a short game, this might be an option. While short lived, the concept of this game is interesting. The game, while a little on the simplistic side, wasn’t bad.