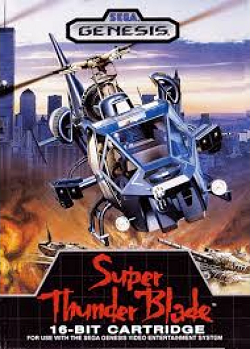 In this review, we take on the gauntlet of enemy fire in the Sega Genesis game Super Thunder Blade. We find out if this third person shooter is worth playing.

You play a helicopter. Your goal is to survive a particularly long gauntlet of enemy fire. Taking out enemies helps a lot for your survival.

The biggest challenge is surviving the gauntlet of enemy fire. While the first few enemies are fairly straight forward, you’ll notice that, in no time, that you face a constant storm of enemy fire. As such, staying still will likely mean you won’t last much longer than 3 seconds. Constant moving is a general must here.

The good news is that enemy fire will target your general direction. So, if an enemy fires at you, you can simply move out of the way and the missiles will fly past you. The bad news is that the enemy fire occurs at constantly different times. Because of this, gameplay will quickly become hectic.

Another threat you face is the various still objects that dot the landscape. You must avoid things like buildings and trees along the way. While these objects are located in fairly predictable locations, these objects do restrict your movement. This increases the difficulty of the game in the process.

Along the way, you may encounter bosses. The goal is simple: defeat the boss to move on.

The game will also change perspectives along the way. There are areas that make this game a top down shooter as well where you basically look at the field with a birds eye view. Unfortunately, movement is further restricted to a single line, so zig-zagging will be a good method of defense.

You have three lives to work with, so make sure you stay alive for as long as possible to get the most out of them.

The first thing that sticks out to me in this game is the pure difficulty. Just beating the first level is, as far as I’m concerned, a big accomplishment. Because the game is so difficult, it can be very offputting to new players.

Another problem this game faces is the short gameplay. You can have your fill of this game easily within an hour. Not a great feature in my view.

In addition to this, there aren’t a lot of features in this game. All you have is your main weapon to sustain you throughout the game. There isn’t any power-ups to be had that I’m aware of, so the game comes off as being very simplistic.

Generally speaking, for me, it’s hard to really come up with very many game features that makes this game excel. Hard, short, and simplistic is not the greatest recipe for a great game in my view. As such, the gameplay is decidedly lacking here.

The biggest strength in this game is the graphics. Very few games are able to take on a 3D look. This game is a pretty good example of what home consoles are capable of early on. Not only is this game 3D, but it also is fairly easy to see objects both close and far away. There isn’t that garble of pixels or short distance limitations I’ve seen in other games. The only thing that is a pitfall here is that depth perception is a little on the iffy side at times when it comes to enemy fire. Still, this is fairly minor in the grand scheme of things. So, well done on that front.

The audio is OK. The music is pretty average as there’s nothing too memorable here. The sound effects are pretty good. As such, the audio is fairly decent all around.

Overall, this game has a lot working against it. For one, it’s incredibly difficult and doesn’t give players much of a chance to get used to things. The second problem is that it is short. You can easily have your fill of this game in about an hour or less. The third problem is that there is barely anything in the way of features. Just a single weapon and three lives to sustain you. The graphics are probably the biggest bright spot for this game as it features a 3D third person perspective that is more than workable. The audio is decent. While the music isn’t that memorable, the sound effects are pretty good. A fairly forgettable game in my view.