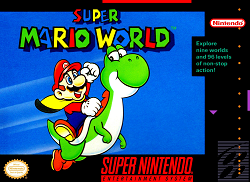 In this review, we hit the color switches for the adventure game Super Mario World. We find out if this SNES game is worth a play.

This game was released in 1991 and was not only a launch title, but also a game that was bundled in with the console. For many SNES owners, this was the essential titles to play on the system. The game follows a trilogy of successful NES titles. The first was the NES launch title Super Mario Bros which got a great score here. This was followed up by the wildly different (at least, for North American gamers at the time) Super Mario Bros 2 which also earned a great score here. Finally, there was Super Mario Bros 3 which earned a near perfect score. Suffice to say, expectations and standards are high for this latest installment to the classic series.

The game starts off with Mario entering Yoshi’s residence. At this stage in the series, Yoshi is a brand new character to the series (one that became a regular character for many games to come). You don’t meat him right away, however, he has left a message saying that he has gone to rescue his friends from Bowser.

From here, you can go back to the over-world. Unlike previous games in the series, the game gives you two possible directions to go – left or right. One path ultimately leads to the area’s castle while the other leads up a large hill. If you go up the hill, you’ll find the first switch level (yellow). This is another concept that is introduced in this game where there are transparent colored blocks (namely, blocks that are merely a dotted outline of where the block should be). If you complete the switch level and hit the switch, you’ll fill in these blocks. Some of these blocks hold items or coins. Others build bridges which make your journey much easier in later levels.

Some features make a return from the previous game. This includes the castles, the ghosts, the auto-scrolling levels, the caves, the swimming levels, and time limit to name a few. The thing with this game is that it adds so much to such core concepts. For example, even though there are mushrooms and flowers, what is new is the feather power-up. This seems to take the place of the leaf. Instead of a tail, Mario now gets a cape to fly around in. While flying is nothing new in this series, the method of flying has changed slightly. Mario no longer just flies upward for a period of time. Instead, Mario flies upward quickly, then hovers using the cape. Flying for certain distances requires well-timed taps on the back button (left if you are going right, right if you are traveling left).

With so many small features, it’s difficult to remember what didn’t make it into this game. This includes the racoon suit, frog suit, and warp whistle. Still, with so much to do, you almost forget those were even things – not a bad thing in my view.

One feature that is new is the key and lock system. This compliments Mario’s new ability to pick items up (such as springs, shells, p-switches, and even some fallen enemies). This feature requires Mario to find a key that has been placed somewhere in the level. If Mario finds this key, then it’s possible to use it on a magically floating lock hole. If the two are united, the lock hole will expand and swallow up Mario, allowing the player to exit the level and open up secret paths and levels in the overworld. While alternate paths in the overworld are nothing new to this franchise, this game takes things to the next level with whole secret sections and even a secret world or two. This is a very welcome addition to the gameplay because there is multiple paths players can take as they advance around the the large overworld. What is also great is that this game doesn’t split worlds into separate entities. Instead, almost every world found in this game is either on or in this one massive world. This certainly adds to a sense of unity between worlds and makes the game less segmented. Moreover, you can revisit worlds you have already beaten – something that was, at best, an unintended feature previously.

Other features new to this game include the paths for moving platforms, an ability to change the path via the on/off switches, the checkpoint tape, the end stage tape (with a whole new star system), an item holding system, expanding and shrinking platforms, yellow rock faces that move up and down, and even grates you can climb and pound enemies on the other side. With so many new features, enemies, friends, and collectibles, it would be difficult to really encapsulate it all into one review. Suffice to say, there is so much to experience, you’ll always encounter new things from beginning to end. the best part is the fact that almost everything is easy to understand.

A great aspect of this game is the difficulty curve. The game will start off easy and gradually amp things up as you go on. By the end of the game, you’ll have plenty of things to challenge you. If you manage to become skilled enough to breeze through some of the later levels, there is always the secret worlds where the difficulty is even greater. There’s something in this game for every level of skill.

With so much going for this game, it’s next to impossible to really think of any faults. The only fault I can see with this game is how slippery things can get when running. Even with moving back, you can’t really stop that well on short platforms. The way to overcome it is to just jump again and re-land on that block if possible. It’s difficult to really call this a gameplay fault because one can easily argue that this also adds a sense of realism to the game.

Generally speaking, this game adds so much to the traditional Super Mario Bros game trilogy. It showcases what a next generation game is capable of very well and keeps things interesting from beginning to end. The difficulty curve is nicely realized and the game even throws in a set of bonus levels for those who happen to be very skilled players.

Graphically speaking, this game was impressive for a game of its time. It even gives the then-rival Sonic the Hedgehog a run for its money. There’s really nothing that I can think of to fault this game in all honesty.

The audio was also a vast improvement over the previous games in the series. It successfully brought over music and sound effects to a new generation. It also added to the existing library with new classics such as the haunted house and new level music. I can only applaud the efforts here.

Overall, this is a game that helped usher in a new era of next generation gaming. So many people call this an absolute classic and typically call this one of the greatest games ever made. Hard to argue with those types of assessments. This game introduced so much, was very playable, and updated already existing classic feature of a Mario game. It has great graphics and great sound. As a result, this game is virtually flawless. Definitely a must-play game.

Update: This game now holds the title for the 1991 game of the year.

Overall
Furthest point in game: Rescued the Princess, beat the star world, and made it over half way through the other secret world.