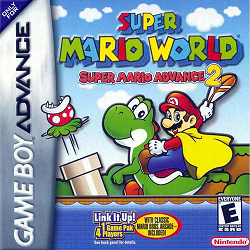 In this review, we take on a giant turtle in the Game Boy Advance game Super Mario Advance 2. We find out how well this adventure game plays.

This game was released in 2002. The game is essentially the handheld port of Super Mario World. That game scored extremely well. The game also packs with it the original Mario Brothers which scored alright.

Since both games have been reviewed here and they are both so similar to the originals, we decided to just focus this review on the differences. This review will start with Super Mario World

The game itself is largely untouched from the original game. If there are differences between the two, I never really noticed.

Super Mario Brothers is also largely the same from the original. The only real difference is that the camera moves around rather than keeping everything to one screen. While this may sound like a pain, it actually doesn’t affect gameplay too much.

If you played the classic Mario Bros. in the first Super Mario Advance, then you’ll have played this version as well. It’s pretty much identical as far as graphics are concerned.

In terms of audio, the quality of the music is slightly degraded due to the porting. Personally, this didn’t bother me too much. What did bother me somewhat is the use of voice samples. I don’t know if it’s because I got too used to the original, but the voice samples surprisingly didn’t fit as well as the original sound effects to me.

The Mario Bros. game is, again, identical to the game packaged in the previous Mario Advance game.

Overall, what is retained from Super Mario World in this portable version is quite impressive. The only nitpicking comes from the graphics where it’s not quite as good, but still largely great. The voice samples is what threw me a little in this game. It doesn’t seem to fit quite as well as the original sound effects. Meanwhile, the Mario Bros is pretty much identical to the version packaged with the first Mario Advance game. An overall good combination worth checking out as far as I’m concerned.