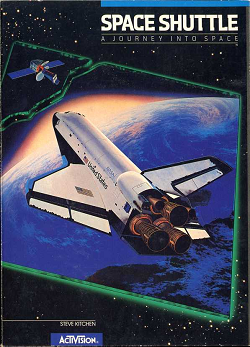 In this review, we get ready for blast off in the Atari 5200 game Space Shuttle. We find out how well this simulation game plays.

There really isn’t much to this game. Your mission is to do a successful flight into space and landing after.

The game pretty much plays itself on launch. You have a countdown. The game controls your rockets. All you do is seemingly sit back and watch.

Once you get into space, watch a satellite zip by. You can adjust your trajectory somewhat for a moment, but after a moment, you’ll suddenly lose altitude as you re-enter the planet.

During re-entry, you, well, watch. The game once again plays itself.

You can use your keypad to switch between statistics of your shuttle.

Let me say this, I have enjoyed flight simulation games. Both Pilot Wings games were enjoyable. So, I think the genre is not that bad. This game ended up being exceedingly boring. The game played itself half the time and the user interactivity ended up being minimal. I beat it on the first run. Don’t know if it was luck or just that it’s a really easy game, but there was no challenge as far as I’m concerned.

Another thing is the fact that this game is slow. If you are hoping for a game where you start actually playing right away, this game isn’t for you. This game is almost half movie, really.

Generally speaking, I struggle to think of positives for this game. It’s long and dull. User interactivity is minimal. Large chunks of it is basically a movie. The only thing players do is land the shuttle towards the end of the game. Having played this game, I find myself wanting those 10 minutes of my life back.

Graphics are a shining spot in this game. The change in atmosphere and the landscape is nicely realized. The extra visual effects are also nicely done.

There isn’t really much for music, but there is sound effects. Those sound effects are pretty decent if you ask me.

Overall, this is probably the most boring game I’ve played in a long time. Use interactivity is minimal. Large chunks of the game plays itself. You only get to play the last bit of the game where you land the shuttle on the landing strip. The graphics are great. The sound effects are decent, though there is no music. This game I would recommend to avoid, though.