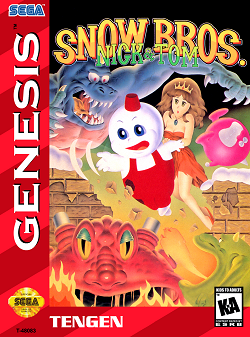 In this review, we stay frosty in the Sega Genesis game Snow Bros. We find out how well this action game plays.

Since this game is so similar to the NES version, we thought we’d note the differences in this review.

One noticeable difference in this game is the apparent lack of mini-games along the way. If there are any, we couldn’t access them. As a result, this game wound up being a little more plain than the NES version.

What I do like about this version is the fact that two buttons are the attack buttons. This allows for some much more rapid fire shooting as opposed to mashing the single button. You may have to put the controller down on something to take advantage of this, but it works quite well.

Beyond that, there are no real notable differences between the two versions.

Probably the best improvement for this game over the NES version is the graphics. The graphics are smoother and the special effects have a much better pop to them. As far as I’m concerned, if you want the best graphical experience out of the console ports, this appears to be the best of the three we’ve played so far. Even though this version came out a few years after the NES version, the graphics are very well done.

One disappointment for me with this version is the audio. The music is similar to the NES version, but unfortunately, seems to have taken a step back. I would have thought that the much more powerful Genesis would have allowed for better music, but the music just doesn’t sound quite as good. The sound effects are pretty decent. So, while it is alright, it is a disappointment.

Overall, this game contains a vast majority of the qualities the NES version has. As a result, a lot of the addicting qualities are retained in this version. Some of the features, unfortunately, are stripped out including what seems to be the mini-games. The good news is that you get a second attack button which helps your offensive capabilities. The storyline is not as well presented as the NES version. Still, the graphics underwent a nice upgrade, but the audio is a step back. A very good effort in spite of the flaws.