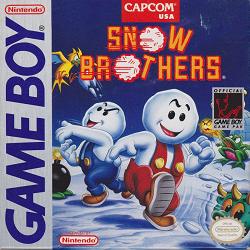 In this review, we stay frosty while playing the Game Boy game Snow Bros Jr. We find out if this action game is worth a play.

This game was released in 1992. We previously played the NES version, Snow Brothers. That game got a great score

This game utilizes a rather different method of revealing the storyline. You start with no storyline whatsoever. As you defeat bosses, you’ll get plates that tell small pieces of storyline. Complete the game and you get the whole story.

Much like the NES version, your method of attack is to throw snow at enemies. If you hit an enemy multiple times, they’ll eventually be encased into a giant snowball. Run up to the snowball and press attack t send the snowball flying down the many levels in the floor. The ball will explode at the bottom, defeating the enemy in the process.

If the snowball hits other enemies on the way down, it’ll take them out as well. Enemies defeated in this manner will leave items behind. These items are either a potion or apiece of food. The potions can either allow players to run faster, increase the distance of your main attack, or increase the power of the main attack. Collect all three potions and you get the effects of all three. The treats, meanwhile, are worth points.

As an added bonus, if you defeat every opponent with a single snowball, money will begin falling down. Collect the bills for points. Collect them all and you’ll even earn a free life.

Every so often, you’ll encounter a boss. While hitting the boss with your normal attack can cause some damage, hitting them with the large snowballs with enemies in them is what does the much more worthwhile damage. For every boss you defeat, the next part of the story will reveal itself.

Another interesting element in this game is the level system. Most games count up the levels as you advance. In this game, the levels count down. You start at B45F and work your way down. Apparently, if you make it all the way, you’ll go up against a final boss very similar to that of the NES final boss. After that, you get 7 additional levels before taking on the games real final boss. In total, there are 52 levels, though it’s possible to skip 2 of them.

Along the way, you’ll encounter different kinds of enemies. At first, the enemies only wander around and are quite harmless. As you advance, the enemies you’ve encountered early on become more aggressive towards you. Some enemies will begin breathing fireballs at you while others will jump around to different levels in the floor more frequently.

Some of the newer enemies later on can turn themselves into hurricanes and go after you. A few of them also charge at you. The most difficult opponents, however, will randomly teleport throughout the maze. This can be a rather frustrating ability as it’s easy to both miss them and randomly get hit by them if you’re not careful.

If you make it far enough, you’ll also encounter pits. Unlike many other games out there, the pits are, by themselves, harmless. If you jump down them, you’ll fall from the top of the screen. So, the level wraps from the top and bottom of the screen. The problem comes when you factor in randomly moving enemies. If you land on an enemy or an enemy lands on you, it’s certain death. You are on a on hit kill basis with only 3 lives to work with, so this becomes dangerous in a hurry.

If you lose all of your lives, then you have the option to use a continue. You get a massive 10 continues to work with. The catch is that your score resets to zero. So, using continues won’t give you much of a chance to get a high score, but it does give you a chance to continue.

This is a game that gives little reason to nitpick. One of the only real problem I have is that this game does depend a fair bit on luck. Sometimes, dying is the result of getting boxed in. Other times, it’s just missing a jump. Sometimes, you die from a lucky move by an enemy in general. Even then, this only happens on occasion.

Another more severe problem is the attack rate. In the NES version, this is practically unlimited. In this game, you can only attack with two shots at a time. I found that this hampered things a fair bit in the overall gameplay.

Beyond that, there are plenty of reasons to give this game a thumbs up. Some may not like the seemingly random nature of boss encounters. I thought it gives the game an element of surprise. It took a few rounds, but the concept ultimately grew on me.

The difficulty curve worked quite well. There were no serious difficulty spikes that I recall while playing. By the time the game grew particularly difficult, I was already being challenged by the game anyway.

I also thought the learning curve was quite small. Nothing to really complain about it here, this game is very easy to figure out.

Generally speaking, this is definitely an arcade game done well and translated well onto the handheld system. Survival does depend a bit on luck. The rate of attack is probably the games biggest problem as that hampered play a fair bit at times. The game has a great difficulty curve and it’s very easy to learn as well. The game has a sort of unique quality to it that makes it rather interesting. This is mainly directed at the method of attack players utilize. An overall enjoyable game.

The graphics are a little hit and miss. It would have been nice to have seen some better details in the background instead of the stark blank backgrounds. Still, the walls and floor are well detailed. Blurring is not much of an issue in this game. The effects used on cutscenes weren’t bad. Pretty decent all around.

The audio is OK. The music, while a good translation from the NES to the Game Boy, ends up being a little on the repetitive side. It isn’t until you get very far into the game that the music seems to change at any significant degree. The music does change at regular intervals, but the music ends up sounding so similar, you can be fooled into thinking it’s the same thing. The sound effects are pretty decent, so it is passable, but nothing special.

Overall, this is a solid game. The unique attack system and low learning curve works into this games favor. The steady difficulty curve is also well realized. Some parts of the game depends a little bit on luck, and the attack rate leaves a fair bit to be desired, but those are the only ways I could complain about this game. The graphics are decent enough. It can be a little sparse on details in some places, but it’s otherwise pretty decent. The audio is OK, but differentiating the differnt tracks can be surprisingly difficult until late in the game. Passable with decent sound effects, but nothing huge. An overall great game.

F3 after using all continues.