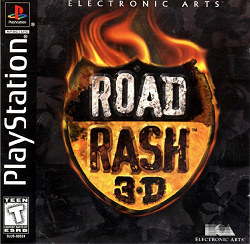 In this review, we thrash our way through the combat racing game Road Rash 3D. We find out what this Playstation game was like.

If you were like us and played the N64 game first, then you’ll quickly notice that Road Rash 3D is not just a different port, but almost a completely different game with only some basic similarities. So, in this review, we decided to focus more on the similarities and differences.

One element that is similar are some of the main modes of play. For one, there’s a “Thrash” mode for, basically, a single player, single race game. There’s also the “Big Game” which is basically your standard 1 player story mode. Also like the N64 version, this game features different levels. Our research suggests that there’s basically only 3 levels. This amounts to easy, medium, and hard. While we never beat the game, we found out that after you beat the game on level 3, you’ll go up to level 4 and, all that means, is that you can race, but always get the message at the end of the race indicating you won. The N64 version did feature levels like this, but there were a whopping 5 levels as well as an unlockable mode (insanity or scooter depending on the gang you rode with) instead. That doesn’t mean this game was shorter, but instead, there were more races in each level.

Additionally, you have to finish in the top few spots to complete the race. As you win races, you earn money for the ability to buy a better bike. Different bikes had different strengths and weaknesses and choosing the right bike depends largely on your style of play. Again, both versions had this basic concept.

Another interesting feature found in this game was the interconnected roads. Instead of just a large race track for each level, there was a whole road network. Each race basically plots a route through the area and has a start and finish. This allowed for mixing and matching of features found on the map like forests, beaches, slums, and even large downtown skyscrapers. While some elements may be recycled on each race, there was always at least some sort of curveball thrown at you like a slightly different rout through downtown. This was a big strength in the N64 game and it was great to see that feature found in this version as well.

At this point, this is where things begin to diverge between the two games. Both games feature combat racing. In fact, both games do feature a wide variety of weapons (though Road Rash 3D’s arsenal was slightly smaller). In this game, the only way to really obtain weapon is by stealing them from your opponents. This is opposed to the N64 where you can not only pick steal weapons, but also obtain them through a variety of pickups found along the race. The Playstation version features absolutely no pickups whatsoever.

You have two health bars: one for the maintenance of the bike and the other is for your rider. If you run out of health for your rider, you’ll wipe out. If your bike runs out of health, then you’ll be wrecked and have to pay for repairs. In the N64 version, combat was a huge part of the game and it was what made the game so exciting. In the 3D version, there was hardly any combat, let alone any important fighting in the race. Instead, you are able to take the occasional swipe at your opponents while you blast past them. The only helpful combat in the race winds up being smashing your bike into them so they slam into objects like on-coming traffic. Even then, this only gives you a minor advantage in the race in the long run. If it weren’t for the damage meters popping in and out, I would have thought that combat was an afterthought in this game. What I did find interesting in this version is the ability to see the health of your opponents. Another interesting element was the fact that you can get damage by running into breakables. This was something I found quite interesting.

Part of what made combat so sparse was the spacing of opponents. In the N64 version, your opponents cluster around the start line. In fact, you are more or less pushed together throughout the race, encouraging combat. In this game, there is a staggered single file start system. As a result, first place probably has a 6 – 8 second head start. In this game, this ends up being an eternity because, chances are, you aren’t catching up to this opponent until well into the second half of the race. You’ll also only encounter the occasional opponent as you race. Only rarely will you encounter a small cluster of opponents. As a result, this puts far more emphasis on racing. Can you swerve in and out of traffic smoothly? Can you navigate corners? If the answer is yes to both, chances are, you’ll do well in this game because, at times, if feels like you are playing a Cruis’n game on motorcycles with rock music. If you are good at combat and knocking your opponents around, well, you might be able to place somewhere in the middle of the pack at best. A bit of a downer if you ask me.

Another disappointing difference was the fact that you can’t replay races you win. In the N64 version, you get a set of races for each level to play. If you win in each race and buy the next level bike, you then reach the next level. In this game, you get a small choice between 1 and 3 races. Once you complete the race, that’s it. You can’t race it again. While this sounds like a small quibble, there is one big implication in the overall play. It makes it harder to earn money by simply winning races. If you win every race, you’ll get a nice chunk of change, but you might not be able to afford the next level bike you were eyeing. As a result, despite how bad the game makes it look, losing races can actually be a small cash cow. If you place 5th in a race several times, you have a better shot at affording the bike of your dreams because you earn a large chunk of change without losing access to the race you’ve been playing. This is probably the only way you can farm money in this game.

Handling was another major difference between the two games. The N64 controls were very tight and responsive. this left plenty of room for creative gameplay like wiping out your opponents simply by steering towards their rear tire. In this game, controls are much less responsive. This contributes to forcing you to focus on racing and, well, trying not to crash into objects. In this game, steering is more focused on which way you lean. You can lean further for a sharper turn or you can counter-steer a little to level out your turning. this enables you to make smooth turns, but also makes left to right/right to left steering a bit of a nightmare. It also makes bike to bike combat more about luck than skill. You also have to plot ahead on the road which way you intend on steering. It isn’t as bad as Wave Race – Blue Storm, but it was annoying to see this problem in another racing game.

One thing that is featured in this game that is nowhere to be found in the N64 version was the various bars you travel to and from. At each bar, there’s different characters that you meet. At the race select screen, one character will make a comment that ranges from amusing to interesting to just plain strange to scary. I thought this added a nice small amount of personality to the game in general, though it was a rather small feature. It can also get a bit repetitive after a while, but it can be enjoyable while it lasts.

I did like the difficulty curve in this game. The beginning races were a cakewalk and the end races were almost impossible to play. The end races could have been made a bit easier, but that is a minor quibble. You are still able to enjoy this game for quite some time before you get to that point.

Generally, I found this game a bit lacking in the combat department. With a staggered start, the gameplay gets a little stagnant at times. This difference was a critical one for me in that this game was a bit of a letdown. Adding to the less responsive controls, this game ends up not holding a candle to the N64 version as far as gameplay is concerned.

Graphically, this game does feature slightly richer textures. The resolution is about the same for textures, but N64 version was softer and blurry whereas this game is more grainy. I do prefer the quality found in this game, but it is somewhat hampered by occasional glitches. The cutscenes found in this game have a certain Michael Bay quality to them, but they also get a bit repetitive. Mercifully, you can simply skip them. The menu graphics were nicely done though.

Overall, road rash 3D ended up being a bit of a letdown after playing the N64 version. The controls were less responsive and combat was barely a feature in this combat racing game. That’s not to say there wasn’t any entertainment value to be had in this game. I did enjoy playing this game for quite some time. I couldn’t beat this game, but I figure I got quite far into it. So, in the end, this wasn’t a bad game, but there’s better out there. If you had to choose between this version and the N64 version, I would vote for the N64 version without hesitation.

Overall
Furthest point in game: Completed all level 2 races. Bought a level 3 bike and basically had my rear handed to me while playing level 3.