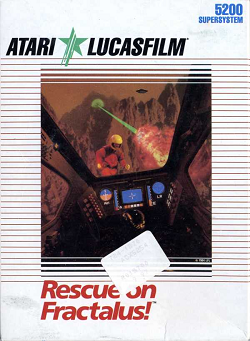 In this review, we search for fun in the Atari 5200 game Rescue on Fractalus! We find out if this FPS game is worth a replay.

This game was released 1986. It is a port from the Atari 8-Bit Family.

The game takes place mostly on the planet Fractalus. Your mission is to rescue downed pilots stranded on the surface. You have a certain quota of pilots you must rescue before returning to the mother ship.

Along the way, you’ll encounter a couple of enemies. There is the blue bar stool cushion that shoots from a fixed location. These enemies can be destroyed by a single well-placed shot, though this is tricky from a distance. In addition to this, there is also a blue suicidal disk that blows up if it manages to get to you before you shoot it down. A direct hit isn’t necessary, but you do need to get a shot that is reasonably close to the target to take them out.

While you do find yourself engaged in combat, your primary objective is rescuing pilots. They show up on a small radar on the bottom right hand corner of the screen. They will appear as brown dots. In your main view screen, if you are lucky enough to see them there, they will appear, at first, as a blue circle, and then as a small black ship as well.

As mentioned earlier, there is a quota of pilots you need to rescue. This appears on the far lower right hand side of the screen next to a “P”. The number will drop for every rescued pilot. If the number reaches zero, you are free to leave the level at any time by pressing 7. If, however, you want to go after some bonus points, you can keep scouring the planets surface for more. The number will be flashing 0, but if you rescue an additional pilot, the flashing number will go up. Getting more than your quota will land you some major bonus points, but they tend to be hard to find.

What I found about this game is the fact that the core basic ideas are actually quite sound. The game is fairly unique in that you are partaking in a rescue mission instead of just destroying targets. Once you start getting past the core basic ideas, that’s when the problems start to emerge.

While you are flying around, you’ll often find yourself just doing barely anything at all. There were a number of times where I was just waiting for an enemy or a pilot to show up just so I would have something to do. These long and dry parts did suck some of the fun out of this game.

Interestingly enough, the combat portions did prove to be the most exciting part of the game. Unfortunately, depending on range and numbers, these moments end up being on the fleeting side of things.

Another problem I have with this game is the steep learning curve. The guesswork that went into landing the ship, then figuring out the other buttons that need pressing to make a rescue attempt successful proved to be annoying. Even ending the level was confusing at first until I finally figured out which number to press under the right circumstances.

Just to make matters worse, Once I did figure out exactly what I needed to do, the levels flying by proved to be repetitive and boring. Fire at occasional enemies, land ship, allow rescue, fly up, lather, rinse, repeat until the numbers reach at least 0. Even though this game started me at level 4, by the time I got to level 8, I just couldn’t stand the idea of doing the same thing yet again and just turned the system off.

Generally speaking, this game does have some interesting basic concepts. Unfortunately, the game hits you on both sides of the learning portion. The game has a steep and frustrating learning curve. Then, once you do figure the game out, it becomes boring because of the repetitive nature of every level being almost the same. The longer I played, the more bored I got. This is thanks to long dull portions of the game where you are more or less just waiting for something exciting to happen.

There is good news and bad news about the graphics. The good news is that this game features an impressive (for the time) first person perspective. Very few games attempt this perspective, let alone this perspective on a jagged surface like this one. The bad news is the face that, with the exception of an occasional black line, all you get is a stark brown texture. Even worse is the fact that judging depth and avoiding peaks can prove tricky at times. So, it is OK, but there are problems with what is found here.

The music between missions is not bad. Unfortunately, once you go into the levels themselves, all you get is engine noise and the occasional sound effect. By this time in gaming history, this ends up making this game a pretty poor performing one on this front. After all, this is the same year The Legend of Zelda was released.

Overall, the core basics of a rescue mission game is pretty exciting. Unfortunately, that novelty does gradually wear off as you play more and more of the game. Just learning how to perform rescues and leaving the planet at the end of the mission carries with it a very steep learning curve as you fumble through the controls. Then, once you do learn how to complete a level, the game gradually becomes repetitive on top of the occasional gap in anything happening at all. You basically play until you get bored as far as I’m concerned. The graphics have the first person perspective of a jagged surface going for it. Unfortunately, there are problems with the graphics with depth perception. The audio does leave a fair bit to be desired. A game to play for a while, but not one you’d go back to after.

Overall
Furthest point in game:
Got bored on level 8 and quit.
High score: 35,489