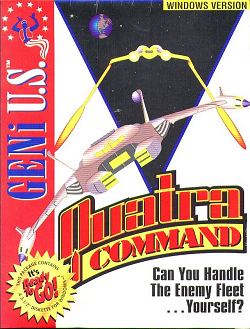 Quatra Command is a top-down action shooter game that pits you against an entire fleet of enemies. We look into how this classic game stacks up today.

This game was released in 1994. While this game doesn’t have one of those names that would immediately jump out to most gamers as recognizable, this small game does have a way of packing a punch.

This game does require a fair bit of troubleshooting to get running on most modern computers, but it is certainly possible to run.

Players are greeted with a loading screen. Each item that pops up while loading are quite humorous. Each item starts with “Loading…” and is preceded by something like, “Lots of bad guys” or “cool explosions”. I’ve seen my share of loading screens for video games and I thought that this was the most creative loading screens I have ever seen. It was simplistic, yet amusing. Even though this game doesn’t require a whole lot of loading time, this added feature really took away whatever pain there was in the loading process.

Once you got into the game menu itself, you are greeted by a music sample which is actually from “D.A.D. – Sleeping My Day Away”. One of the few reviews I’ve seen from this game said it was some surfer music which isn’t necessarily inaccurate (even if a bit vague). Still, what was creative and impressive was that someone managed to attach a song with a surfer music vibe to a sci-fi space shooter game and made it work extremely well. Many sci-fi games have an electronic vibe, a dark creepy vibe to it or simply attached classical music. This game went in a completely different direction with an intro tune and it worked really really well.

What also pops up is a quick diagram that shows the three ways to play (mouse, joystick or keyboard).

Users are given three options. One leads to a brief instruction window which shows how one plays this game (mission). One quits the game (Abort). The final button starts the game (Start). If you are running this game through DOSBOX, turn the cycles down to 5%. Otherwise, this game runs WAY too fast and you’ll die within seconds.

You have three lives and three “points” of damage. You get damaged up to three times and you lose a life. You lose all three lives and it’s game over. Healthboxes restore health points. The grey shield with a red “S” gives you a shield. The round grey object with a “P” gives you proton firepower (which effectively doubles your firepower, really).

When you fire, you can fire up to 3 times. After that, you have to wait for your shot to run off the top of the screen, disappear, or hit an enemy. If you get proton torpedo’s, you can fire up to 3 of those shots as well. So, with normal shots and protons, you can get up to 6 shots. Proton torpedo’s can be upgraded if you collect more than one Proton powerup before dying. All powerups (that I could tell anyway) come from destroying enemies.

The first level is fairly straight forward. Up to three enemy vessels appear on screen. Each vessel can fire a shot straight down. In the midst of these enemies, you have the occasional asteroid flying from one side of the screen to the other. They can be damaged by both you and enemy fire, but if they get hit, smaller bits of rock will fly in different directions at a faster rate. Once they get down to the smallest form, they can be fully obliterated. One tip with asteroids. If they collide with enemy ships, they will destroy the enemy, so asteroids can be both a helpful things as well as a hindrance.

The second level is kind of similar to the first, though a little more difficult as enemy vessels strafe more from side to side as they fly through. Still, shots fired go straight down.

The third level is a little more tricky as enemies will also leave hero-seeking mines (for lack of a better term). These mines start off simply floating where they were left off by an enemy, but then eventually start flying at you at an increasing speed. If you dodge them the first time, they’ll simply fly off screen.

The fourth level adds enemies that drop larger versions of the aforementioned hero seeking mines which are a little tougher to fly around.

The fifth level introduces bad guys that fire shots that have larger bullets. Added to this are the introduction of (indestructible?) outposts which is essentially an enemy turret that is parked on an asteroid and fires more mines at you. These outposts don’t simply float down to the bottom of the screen either. They can float back up towards you too, so these enemies take a lot longer to stop picking on you.

One useful hint I can give you is that when you are trying to avoid enemy mines, moving around in circles around the screen really helps. If all the mines are going to fly in one direction, just move towards them and go through them. These mines don’t have a very good turn radius, so use that to your advantage.

The graphics are pretty fairly basic for a game of it’s time. When you consider the fact that a number of SNES games have been released at this time, putting the graphics of this game in perspective to those kinds of games says to me that graphics were pretty average by comparison. They weren’t awful by any stretch, but they weren’t the greatest things ever for a game of it’s time either.

The audio was a major highlight of this game. The use of samples really went a long way in turning what might be a slightly above average game and turned it into a pretty good game. Highlights are the sound effects thrown in, the speech samples (AAAAAAAGGGGHHH!!!!!), the music intro which I touched on above, and even the in-game music. Really well done in this department.

This game, overall, was a very difficult game. Each round typically only lasts a few minutes before you are done. How large this game is, I honestly don’t know. Judging by some of the information I have been able to dig up, this game has at least 7 levels. I couldn’t find any FAQs/walkthroughs or anything that sheds light on this. There is one glaring negative of this game though: no speed control. Sometimes, this game speeds up considerably for brief moments of time, making it hard to navigate through. It seems that this game is entirely dependent on how fast your processor (or emulated processor) is running. So, if there was lots of objects on screen, the game slows down. If there’s only a few enemies and no firing going on, the game would speed up (an incentive to keep firing if there ever was one!). If there was a speed gauge attached to this game that dictated how fast everything ran, I would say this game was an excellent game, but it lost points because there was no control of how fast the game ran. Since it’s a real time action game, this, I think, was a critical error on the development side of things. Still, in spite of the difficulty and the sudden jumps in speed, this game was quite enjoyable. So, fun little distraction you can play from time to time.

Furthest point in game: Died on level 5. I think I was most of the way through it as I was able to survive for a long period of time before dying.