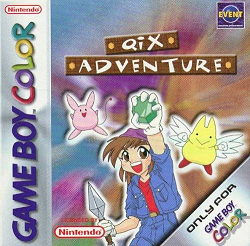 In this review, we get drawn to the Game Boy Color game Qix Adventure. We find out how well this puzzle game plays.

This game was released in 1999. It is a sequel to the original game, Qix. The Atari 5200 version scored very well. So, we thought it would be interesting to review one of the sequels.

You play as the protagonist Speedy. Your mission is to go on a treasure hunt with your boat as the home base.

You start off with an overworld map. You can select a few areas. If you complete one area, you have the option to either backtrack, or to take on some new areas that are now accessible. Complete every area to beat the game. However, you may notice that you can keep playing well after the credits roll. In that case, you are basically focusing on getting a more complete inventory of treasure after.

When you enter an area, you’ll encounter a monster. After some interaction, you’ll be able to “battle” the monster. Interestingly enough, you don’t actually have to defeat the monster, just satisfy the standard Qix objective of taking over 75% or more of the territory.

If you choose to do the optional task, you can obtain the treasure. To do so, you must first surround the wandering monster. If you are successful, the treasure chest will open up. The next step is to surround the treasure. Doing so will allow you to collect it and add it to your collection.

From there, it is possible that another monster and chest will appear. Surround the monster and then the treasure and you’ll collect a second treasure. Apparently, you can collect up to three “gems” in each round, but I’ve only been able to collect 2.

In each area, you have a series of matches you get to take on. Complete the final level in the area and you’ll get a nice picture in the end before being able to move on.

The good news is that you’ll never have to face two Qix enemies in this mode. This makes it a little easier to complete objectives and not use up any lives.

One pitfall of this game is that the game forces you to go through a large tutorial at the beginning of each new adventure. While this may seem like a sound idea for a game like this, the game takes the unfortunate tact of confining all text to a mere two lines. While the pictures do help, it takes a while to go through the tutorial just to get a basic understanding of how the game works. This may be off-putting for a lot of new players to this game.

On the bright side, the game does a very good job at retaining elements that made the original fun. While the additional content may seem like something that over-complicates the game, it becomes a rather straight forward addition that makes things even more interesting. In my view, the game borders on not having enough new content, but I think there is a satisfying amount of new content to keep me content.

A major downside, however, is the writing. Not only is the tutorial long, but the interactions between you and enemies are barely sensible. Because of the bad writing, I have a strong urge to just skip the cutscenes altogether with start. Even though the enemies have new dialogue on the second visit, the exchange becomes little more than annoying bulk tacked on to the game.

Another complaint I have is the lack of a hall of fame. After you lose all of your lives, the game just boots you back to the intro screens again. So, there is no way to input your score. This is especially odd because the original mode actually has one of these. Why isn’t there any in the adventure mode, anyway?

Generally speaking, this is an interesting game. It does have its flaws such as the tutorial and dialogue. Still, it manages to retain a lot of what made the previous version fun. In fact, the gameplay, even after all those years later, still remains to be a rather unique experience. That, in and of itself, is quite impressive considering how much this game sticks to the core elements. While the writing may leave a lot to be desired, the system that is set up in adventure mode works quite well. The original is still fun as well even though it may be a little on the simple side by 1999’s standards. An interesting game.

A big question mark I had in my head going in to this game was how will the graphics turn out. The original was so basic, yet it somehow managed to work. While the original mode retains this simplistic look, adventure mode steps things up. Taken over territory reveals some interesting art. The only downside is that you can’t tell the difference between territory you took over quickly and territory you took over slowly. Still, the score can retain that information anyway. The changes made are pretty on point for how much you can take things up to another level. The still images are also well done.

The audio isn’t bad. The music works pretty well for the game. While the music tends to meld together, there is enough variety in the music itself to keep things interesting. The sound effects are pretty basic, but it’s also hard to imagine how much more can be added to a game like this. So, a pretty decent job here.

Overall, this game has a lot to offer for a game with such a simplistic origin. The adventure mode has a great structure going for it. The tutorial and dialogue did leave a lot to be desired. Meanwhile, the objectives that are added (albeit optional) work surprisingly well. What’s more, the unique nature of the game is pretty impressive even though so many core elements remain the same. The graphics are well done and the audio works well for this game. A pretty solid game if you ask me.