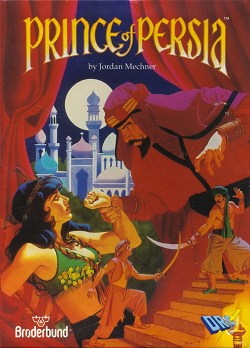 In this review, we brave the dungeon’s in the action adventure game Prince of Persia.

This port of the game was released in 1990, a following year after the initial Apple II release. What makes this game particularly interesting is the fact that this is the first game here on Freezenet that was recommended by you, the reader. In fact, multiple readers recommended this game.

The plot is fairly straight forward. The princess is forced to decide between marrying an evil wizard named Jaffar or death. Apparently, this proposition doesn’t exactly win over the heart of the princess, so Jaffar gives her an hour to make her decision. Lucky for her, a brave soul currently working his way through the dungeon’s below is on a mission to save the princess and defeat Jaffar.

This is one of those interesting elements of the game: not only do you have to navigate the perils of the dungeon, but you also have a time limit that is occasionally flashing below. This certainly gives this game a sense of urgency even though proceeding through the dungeon with caution is definitely recommended.

The controls definitely have a bit of a learning curve to it. There is “the button” that is extremely useful. The button, or a sort of action button, is actually the left shift button. This button allows you to do things depending on the situation you are in. For instance, if you are standing on a loose tile that is about to fall, holding down the left shift button will allow your character to grab a hold of the nearby ledge (provided you are close enough of course) and prevent damage from a potentially long fall. The button also allows you to pick up and drink potions as you find them. It also allows you to swing a sword provided you’ve found it whenever you are squaring off with one of Jaffar’s many henchmen.

Another critical control is CTRL-Q. To date, I’ve never played a game where the Esc button didn’t allow you to exit the game until I played this game. In this game, Esc merely pauses the game. CTRL-Q allows you to actually quit.

Actual movement is deceptively complex. While left and right obviously allows you to move left or right, the number pad numbers 4-9 have their own controls. If you face left and press 7, you’ll jump from a standing position to the left without running. The same idea applies for 9 where facing right and pressing this button will allow you to jump to the right. Up allows you to jump. Standing still allows you to jump up and possibly grab a ledge or hit a loose tile in the ceiling. Naturally, if you are running and you press up, you’ll be able to perform a running jump (the longest jump you can perform on a flat surface).

A critical item that you’ll find in the dungeon (namely the first level) is the sword. Collecting this will allow you to fight enemies. If there is a way to complete this game without a sword, I wouldn’t know, but I kind of doubt you’ll get far without it. Once you obtain it, you’ll be able to go into an en garde mode which has your character drawing his sword. You can move forward and back with the arrow keys and the button allows you to strike. Two fighting strategies I’ve formed from my play is a sort of offensive attack vs defensive fighting. Defensive fighting is simply waiting for your enemy to approach you. You wait for the enemy to go into attack range and you strike. It takes a moment for your enemy to both move and strike whereas you simply have to strike. Often, weaker enemies can’t move fast enough and you can earn a successful hit. It often requires quick reflexes, but it’s a fairly sound strategy for simply surviving these encounters. The offensive strategy involves you going to your enemy and striking first. As soon as you strike, your enemy will be knocked back a bit. If you use that brief second to your advantage, you can move forward once and strike again. Alternating between moving and striking can allow you to land multiple blows in rapid succession. This is useful if you find yourself fighting the undead and are required to knock them back into a bottomless pit as those fights are purely about positioning. Be warned, though, a badly timed strike can allow an enemy to hit you fairly easily. There are no doubt numerous other fighting strategies, but these were the two I quickly formed and allowed me to advance in a reasonable fashion.

While enemies are definitely dangerous, chances are, you’ll find the numerous traps and triggers far more challenging and deadly. One trap are the triggered spikes that appear once you approach them. You can sneak through them, but falling onto them can mean certain doom to your run. In addition are loose tiles. The good news is that if you jump up and down, you can see them wiggle a little. So, at the very least, it’s possible to spot them. There are also numerous switches throughout the dungeon. Some switches appear to do nothing. Others open the numerous portcullis gates found throughout the dungeon. Often, the portcullis will open, but only for a limited amount of time before they gradually close back down again. Sometimes, these timed switches can be kept down by dropping a large tile onto it, but this doesn’t occur too often. Fallen enemies can also hold down these switches. Switches simply look like slightly raised tiles in the floor and you simply step on them to activate. Pits can also cause problems for dungeon dwellers both you and foe. Some of them are long drops that cause damage. Other times, they span multiple screens and kill you. Still, if you manage to make it all the way to the end of the level, your mission is to find the switch that opens the door which permits you to run up the stairs and challenge the next level.

One thing that is great about this game is that there is actually a lot of variety found in this game. A part of me was worried it was going to be a game that repetitively gets you to step on switches, open doors, fight an evil henchmen, activate a switch to trigger the exit and tackle the next level repeatedly. In spite of the seemingly simplistic layout, there was a lot of variety that kept things interesting. The only thing that was really repetitive may be the textures (there seems to be only two sets), but because of the layout, this isn’t that noticeable.

My big criticism for this game is that the controls can be, at times, rather laggy. I’ve run into this numerous times where I push up right before a jump only to have the hero simply run blindly towards the bit, run off, and die on impact below. There were other times where I would hold shift and think I’m positioning to climb down only to simply walk off the ledge and hurt myself on the bottom. The game is challenging, but half of it was because of finicky controls.

Another thing about this game is the fact that the shift button was used as a main action button. Unfortunately, if you run this through DOS box on Windows, you run the risk of triggering a Sticky Keys window while battling an enemy. This, in my opinion, is to no fault of the game as this version was designed for DOS and not Windows. A workaround is to also hold down the Control key. Since you are simply using left and right as well as shift, nothing is triggered because of this and it stops the Stick Keys feature from triggering in the process. Since Control tends to be close to the shift key, I found this to be the most comfortable workaround.

This game, though, definitely has its own charm. Even though the difficulty is seemingly set too high, it’s designed in such a way that you can learn from your mistakes and quickly figure out a way of overcoming that next obstacle. Because of this constant sense of progress, you always want to keep trying to see how much farther you can get. For a game that is heavy on a puzzle element, this is actually quite impressive given that a number of games like Shadowgate 64 and Adventures of Lolo eventually stop you dead in your tracks with a puzzle that you can seemingly not solve. That element definitely gets a thumbs up from me.

Graphically, there aren’t that many games that matches the overall graphics quality. Games like Super Mario Bro’s 3, Mega Man 2, and Captain Skyhawk may have graphics equal to or better than this game, but there were no shortage of games that don’t stack up to this game at the time too. The realistic character animations rightfully garners the praise in terms of quality. The torches and overall scenery were pretty good too. In fact, some of the architecture in the game looks like architecture from the Persian empire. So, even though there was seemingly only two scenery sets, I would say it was pretty good overall anyway in spite of the occasional animation skips.

The audio was pretty good. My only criticism was that the higher pitches sounds in some of the music were a bit much, but it was otherwise not bad. The sound effects were very good overall and definitely gives off that ancient middle east feel.

Overall, this is a very solid game. It may have a bit of a learning curve with some of its controls, the difficulty may be a bit much, and the controls may be a bit laggy at times, but it’s still a pretty good game. You can predict a good portion of the lag and adjust your gameplay accordingly (like pressing up a little sooner to make the jump). The variety found in this game is quite impressive. The animation and overall graphics, though not perfect, is quite good. The audio was pretty good, though the higher pitched sounds may be a bit much in the intro music. A game definitely worth playing.

Special thanks to Signa and Rich for recommending this game!