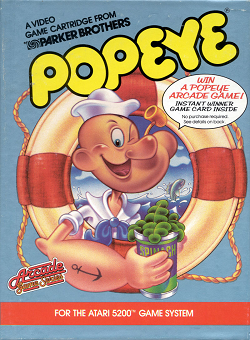 In this review, we get ready to eat spinach in the Atari 5200 game Popeye. We find out if this adventure survival game is worth trying.

You take control of a famous cartoon character named Popeye. It seems that the goal is to rescue a maiden in distress. In order to do so, you must collect a sufficient number of items in each of the three levels.

The first level is a city-like level. You need to collect pink objects that are floating down. If you collect enough to fill the top right house, you advance to the next stage. In the second stage, you need to collect a sufficient number of musical notes in a downtown location at night. If you do that, you’ll advance to the final round. In the final round, you navigate your way around a ship. You must collect sufficient letters (which spells “HELP” to raise the ladder to the crows nest. If you complete that round, the game loops back to the first round and the difficulty increases.

While that sounds pretty straight forward, there are a number of enemies that are trying to stop you. There is a bad guy that wanders around the levels trying to stop you. The bad guy can punch you directly and hurl cans at you. If you happen to be directly above him, he can stop and punch upwards. If you are directly below him, he can get down and try and grab you. Any point of contact with any of these attacks will cost you a life.

To make matters worse, there is a monkey that randomly throws cans from the side of the screen. In the initial round, it is a single can. In subsequent rounds, the number of cans he throws increases.

There are a number of ways you can defend yourself. The most effective is just general evasion. Running up and down stairs can give you methods of escape. You can also climb up and down ladders (first level ladder is down only). Jumping down off of ledges can also be a good method. Finally, standing in the middle of a wrap-around point (denoted by arrows) can also help you lose your enemies for a while. It is all about simple evasion.

When evasion doesn’t work, there are other ways of protecting yourself. On the side of the screen, there are cans. Sitting on top of the can is what appears to be pin spinach (???). This spinach rotates around all of the cans. Punch the spinach and you obtain temporary invulnerability. your character will turn into a different color. All of the items on screen will temporarily freeze in place. Most importantly is the fact that you can knock out the main enemy off the screen into the water below. This incapacitates him for a while. Be warned that you can only do this once per level, so use this wisely.

Another form of defense us using your punching ability. While you can’t punch the main nemesis in the game, you can punch the occasional can that is thrown at you. Even though this avoids some attacks on you, you need to exercise really good timing in order to knock out the flying cans. Sometimes, you can miss and get killed. The sensitivity of a hit is also a bit touch and go, so this method isn’t always that reliable.

There are also features found in the various levels that can help you out. If the enemy is at a certain location, you can punch the punching bag. The bag will wheel over to a large barrel. That barrel will fall down and temporarily incapacitate your enemy. With this trap, timing is everything.

In the second level, there is a teeter-totter with a character standing on it. If you jump off the left-hand ledge on the second level, you’ll bounce you way all the way up to the top level. While this is a useful method of evasion, know that the main enemy can also make this jump.

In the third level, there is a moving platform that will propel you from one side of the level to the other. This can help you get away from the enemy in a much faster fashion.

One additional enemy is found in the third level. This is the seagull. The seagull will fly from one side of the level to the other at the top level. This makes the top level a fair bit more risky, so lower levels may be a safer bet if you can avoid the occasional can throw.

Generally speaking, this is a pretty decent game. Though the number of levels are short, it takes a while to actually get through all of them. This, of course, assumes that you survive the experience. I find that if you do complete all three levels, even though the game offers unlimited play, the motivation to continue drops dramatically. Even then, this game does offer plenty of gameplay.

Graphically speaking, this game is decent enough. While not the most amazing graphics in the world for the time, there is nice colorful scenery that you can enjoy. Some objects are rather difficult to see, unfortunately.

The music is pretty decent. Even though there is only one real track you listen to throughout gameplay, it is pretty good. The sound effects are also decent enough. Overall, a decent enough job here.

Overall, this game is certainly worth playing. While a three level game that loops may not sound like much, the amount of time needed for each level certainly gives players enough gameplay. It may take a little bit to figure out what is going on, the learning curve is fairly shallow here. Though the graphics aren’t perfect and there’s only one real track to listen to, I certainly don’t regret trying this one. A game that gets a thumbs up from me.

Overall
Furthest point in game: Beat all three levels and died on the second round, first level. High score: 19,350