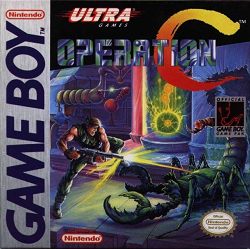 In this review, we blast our way through the Game Boy game Operation C. We find out how well this action game plays.

This game was released in 1991. It is part of the Contra series. We previously ran into this series while playing Contra on the NES. While we found the game difficult, it was, nevertheless, a highly enjoyable game. So, why not give the Game Boy version a try while we are at it?

In this game, once again, Earth is threatened by alien invasion. It is up to the elite protagonists to stop it.

Your mission starts off at a city harbor before making your way to an island where the source of the invasion is located. In total, there are 5 areas for you to take on.

You start off with a machine gun, but there are a number of item pickups that will allow you to upgrade your weapon. There is the flare shot which fires explosive balls of energy. On contact, they spread four additional balls in four different directions for additional damage.

Another weapon is the spread shot. This allows players to fire in a spreading pattern. While you can get about 3 shots, you can stack an additional spread and increase the spread to four bullets per shot.

Probably the most effective weapon upgrade in the game, however, is the heat seeking shots. They behave like an simple spread shot, but whenever an enemy appears, the shot will simply go into the enemies direction. This can allow some very complex shots to take place. This includes being able to stand safely off to the side while your shots hit various boss and mini-boss weak points.

You start off with two free lives. Like other Contra titles, you are on a one hit kill basis. So, coming into contact with an enemy, harmful object, or getting hit with an enemy shot will kill you off. For every 25,000 points you earn, you gain an extra life. Since the game doesn’t track your points live and only tells you after you beat an area, the chime of a free life earned is the only way to know mid-level.

At the end of each level, you’ll encounter the area boss. Defeat the boss and you advance to the next level. With the exception of area 1, area’s also contain mini-bosses. Defeat the mini-boss to continue on.

In two of the area’s, the game switches to a top down angle. This style of gameplay – especially area 2 – closely resembles what you find in the game Ikari Warriors. If you have experience with that game, these areas may be somewhat easier.

Contra is well known for being a difficult game. This version is a little easier. Probably a big contributing factor is the heat seeking weapon upgrade. Once you are armed with this, the game’s difficulty does drop somewhat. The game, however, is still fairly difficult.

While a steep difficulty curve hurts a lot of games, it doesn’t hurt this one as much. This is because the game does give you a chance to experience a lot of what it’s all about before your lives start dropping like flies.

One downside to this game is the jumping. While you can jump extremely high, jumping any reasonable distance is a tall order. You can only make small gaps on screen. This tends to be a rather annoying element.

Another downside is the lack of point tracking. Since you can earn free lives, you’d think this would be included on screen. Unfortunately, this isn’t the case for this game for reasons that are, well, unknown to me.

Still, the assortment of weapon upgrades and variety found in each area is well done. In fact, this is a very successful conversion over to the much more limited Game Boy system. So, while this game has some minor flaws, it still boasts some very solid gameplay.

The graphics are also successfully converted over to this system. Save for some blurring during jumping, it’s hard to find any complaints here. The backgrounds and characters are all well drawn. An impressive feet to say the least.

Audio is another element that is very well done here. The music is very similar to that of the NES music. It’s actually impressive how close the music gets to the original music. The sound effects are also very nicely done. A solid effort here.

Overall, this is a very successful conversion from the NES to the Game Boy. While difficulty is an issue, it’s only minor thanks to nicely powerful weapon upgrades. The jumping leaves a bit to be desired and the lack of point tracking during the level is a disappointment though. Still, this game is quite enjoyable. The graphics, save for some blurring in the jumps, are nicely realized. The audio is also impressively well converted too. A very solid game to say the least.