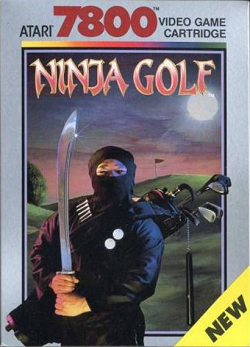 In this review, we try and make sense of the Atari 7800 game Ninja Golf. We find out how well this action game plays.

Ninja karate fighting and golf. Golf and karate ninja fighting. No matter which order you put it in, it makes no sense. Nevertheless, that’s what this game is all about. You are apparently a ninja master and you face your toughest challenge yet. This challenge involves 9 holes of ninja golf. Failing to complete the course means you bring dishonor on yourself and your whole family. If you think this explanation, however accurate, is strange, it only gets weirder from here.

You tee up at the first hole. After you aim the ball and hit it, the other part of the game kicks in. You need to run to the ball all the while fighting adversaries. Many of them are other ninjas, but some of them are different animals trying to kill you off as well. This alone makes me wonder if this takes place in Australia. The non-human enemies you encounter depends on the terrain you are on.

On the fairway, you encounter what I think are moles that throw rocks at you. In sand traps, you fight against deadly snakes. In the water hazards, you take on deadly sharks. IN the rough, you encounter giant frogs. Those are just some of the enemies you encounter.

Once you make it onto the green, you are left to fight with a flying fire-breathing dragon. The objective is to hit it with enough ninja stars for it to fly away. Apparently, sinking the ball into the hole isn’t a thing as you just win the hole once you beat the dragon.

After this, you get bonus points for completing a hole as well as the number of strokes it took you to get to the green.

One big thing that holds this game back is that the golf elements weren’t very well realized. Probably one of the few things it got right is the overview shot and aiming. After that, you just hit the ball. There’s no real way the game tells you about power of the shot or anything. So, a lot of the gameplay focuses on the beat ’em up aspect.

The beat ’em up aspect of the game may be somewhat more developed than the golf elements. There are items you can collect to help you along. The stars can be used as a weapon. The potion bottle restores some of your health. The shield grants temporary invulnerability. The more enemies you take down, the more points you earn. Still, you have to watch your health. You do, after all, only get 2 lives to work with.

The only positive in this game that I could come out with is the fact that you get the novelty of playing a truly weird game. Almost nothing about this game really makes any sense. All you can do is get a strong grip on the basics of both genres and go from there.

Beyond that, this game starts off weird and only gets worse from there. Generally speaking, you have an underdeveloped golf aspect and a repetitive beat ’em up section smashed together to make one big mess. One could argue that you also have a shooting gallery element at the green, but this is a smaller part of the game. Even then, the definition is a bit stretched to call it a shooting gallery element.

The graphics were OK. They weren’t amazing by any means. The Heads Up Display (HUD) is pretty helpful in helping you along. The drawing of the characters and scenery were OK. The menu screens were half decent, but nothing huge.

The music was pretty stereotypical. Some of the jingles that were thrown in were so stereotypical, it was like nails on chalkboard in a way. The sound effects were OK, but nothing huge.

Overall, probably the only good thing to say about this game is the novelty of playing a truly strange game. The golf elements were under-developed and the beat ’em up aspect was repetitive after a few holes. The best part of the graphics was the fact that the HUD was helpful. After that, there was a whole lot of average going on. The music was pretty stereotypical (not in a good way at times) and the sound effects were OK. A game to play if you want a strange experience, but nothing much beyond that.