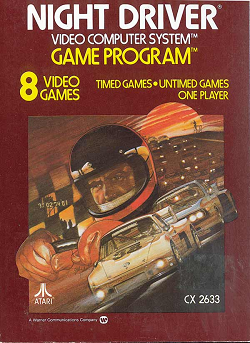 In this review, we race through the streets in a game called Night Driver. We find out if this Atari 2600 game is a good game or not.

Night Driver was released in 1978 and is a port from an arcade game of the same title.

The game is a third person perspective driving game. The objective is to see how far you go before time runs out (90 seconds). You accelerate with the fire button and use left and right to steer.

Some modes of this game are timed while others are not. The one mode I tried that wasn’t timed seemed to just go on forever.

You score points seemingly by traveling a certain amount of distance without crashing into something.

The two main obstacles you’ll encounter are other vehicles and massively curvy roads.

Personally, I found this game to be one of those games that tries to accomplish a lot and falling far short in the end. The controls are quite bad and I never was able to travel very far without crashing into something. On a rare occasion, I’ll get lucky and last about 5 or 6 seconds before losing control of the vehicle, but beyond that, the game is frustratingly difficult.

The game also almost seems pointless to me. You drive down a road, that’s it. No reason for speeding. No destination to get to. Just driving. I don’t personally think that this is enough to make for a good game.

Graphically, this game left a bit to be desired. You don’t have much draw distance, so I would imagine the best thing for this game is if this was slowed down a little. Otherwise, I can barely see where I am going half the time. The road was merely two lines of dots on either side. Your car almost doesn’t even look like a car. The other cars on the road were better drawn even. The houses and trees added a little scenery, but it was otherwise a rather bleak game in this category.

There was no music, but the only sound effects that were even half decent was the car horns of other cars and you crashing. Beyond that, there was nothing much to this game in this category either.

Overall, this game was definitely a swing and a miss. I can appreciate the kinds of things it was trying to accomplish, but it simply failed to get there. The controls were awful, the graphics left a lot to be desired, and there was hardly anything in the way of sound. So, I would say this game should be avoided. I want those 15 minutes of my life back.

Furthest point in game: Got 16 points in the default starting mode.