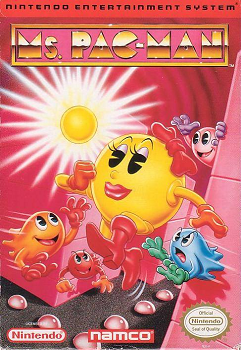 In this review, we check out the NES version of Ms. Pac Man. We find out if this port of this famous survival game is worth the play through or not.

This particular port was released in 1993. Apparently, this was a more straight forward port from the Arcade version. Already, we reviewed the Atari 5200 and the Atari 7800 versions, so we’ll look at if this game stands out from the rest of the known ports of this game or not.

There’s very little difference between this and other versions we’ve previously reviewed. One of the key differences is the fact that the aspect ratio seems to have changed in such a way that the maze area is much taller and skinnier. This seems to give more room along the side for the scoreboard.

Beyond that, pretty much everything else remains the same. There’s the power pellets, the occasional bouncing food, the need to eat every pellet to move on to the next round, the cut scenes that show up every few levels, and, of course, the need to avoid the ghosts when you don’t have the effects of a power pellet.

Graphically, this game is better than the Atari versions, but the improvements are only minor. While a good thing, other games were improving much more than the rate this game seemed to be evolving. So, in spite of the improvements, the graphics are somewhat unimpressive.

The sounds are less abrasive than the Atari versions, but again, the audio is only somewhat improved. So, decent overall, but nothing amazing by this point.

Overall, after all of these years of development, you’d think this port had more to give. Apparently, that wasn’t the case. So, while it still retains some of the great playability characteristics that made this game such a hit in the first place, I don’t really see this version as evolving with the times fast enough.