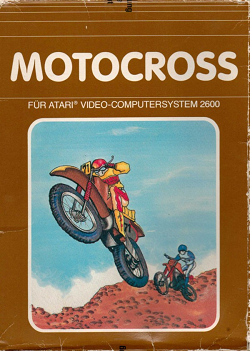 In this review, we get it in gear for the top down racer Motocross. We find out how well this game plays.

Motocross was released in 1983.

The game basically revolves around you racing down a straight race track. Pressing the button will get your motorcycle to drive faster while releasing it will mean your bike decelerates. You guide your bike through packs of other racers and occasionally through obstacles. In the midst of these obstacles are little flags that you can collect. The goal appears to be simply to complete “laps”. If you run out of fuel before the lap is complete, it is game over.

That’s, well, pretty much it. How you can complete laps more efficiently seems to revolve around how quickly you get distance. Other than that, it’s hard to tell what helps you complete a lap faster.

It’s also unclear to me what the yellow flags do exactly.

What’s more puzzling is how damaging it is to either run into other bikes, the side of the road, or obstacles. Running into other racers of the side of the road seems to slow you down, but it’s hard to say if your bike actually gets damaged or anything. If you run into things like rocks or holes, it becomes harder to control your bike for a brief period of time as it shakes around the road a bit.

While it’s clear that you need to race through these obstacles as quickly as possible without hitting anything, hardly anything else is really clear about this game.

Graphically, this game is not the worlds greatest. By this time, there are Atari 5200 games floating around and a number of these had better graphics than this. So, I would say the graphics are passable, but little else.

The sound left a fair bit to be desired. You mostly hear just the roar of the engine or get a small “crashing” sound if you run into anything. If you complete a lap, you hear a jingle, but that’s pretty much it. Not the greatest game out there at the time on this front, that’s for sure.

Overall, this game is a bit confusing from the beginning and has limited replay value. while the graphics are passable, the audio just didn’t cut it. It might be interesting to play for a few minutes, but that’s pretty much it. There’s better out there.