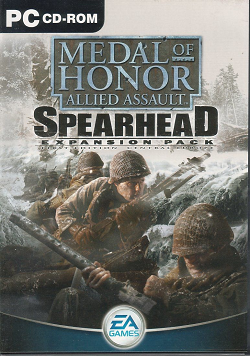 In this review, we try to take on the enemy forces in Berlin in the PC expansion, Medal of Honor – Allied Assault: Spearhead. We find out how well this First Person Shooter plays.

We have already gained some knowledge of the Medal of Honor series. Previously, we reviewed the original Medal of Honor game and gave it a somewhat mediocre review thanks largely to the graphics. We then reviewed the sequel, Medal of Honor: Underground. While we said the game did feature improvements, it still wound up being a mediocre play as well. It really wasn’t until we reviewed Medal of Honor – Allied Assault that we felt that the series was turning things around.

The expansion follows a new protagonist, Sergent Jack Barnes. The game takes place over three theaters of war, ending during one theater towards the end of World War II.

While the game does more or less follow the same level structure, the game is much less formal about the set missions. Instead of having an opening cut-scene and closing cut-scene which takes place in the briefing room, the game is much more cinematic. It also puts less emphasis on having a sort of handler giving orders like the previous games. Instead, orders are generally given on the ground as the war situation advances. In fact, the only real way you can tell that you are going from one mission to another is the location and time stamp at the beginning and the poetry reading with a stats screen at the end.

What’s new in this game is the fact that it introduces in-mission cinematic’s. You are able to look around, but have no control over your character. This new feature is apparent immediately with the parachute scene and takes place at various stages throughout the game. It doesn’t happen that often, but it is something that occasionally takes place.

Another new feature is the introduction to the failing explosives feature. In one level, you find yourself lighting a fuse only to have the rain knock it back out. The only real way I found around this is to back off and shoot the explosive to set it off.

Some might argue the fox hole level is a new concept. I say, if you compare it to the beach assault in the original game, the concept isn’t entirely new. The only real difference is that you are evading explosions instead of machine gun fire.

One thing not found in the expansion is the use of a medic that gets you additional health. While a medic is in this expansion, he is used in an escort mission instead. Previously, a medic can replenish your health in the midst of the battlefield.

One thing that is new is the health barrels. Health barrels are used just like the large medical kit in that it restores all of your health. These barrels are only found in the tank mission towards the end of the game. It marks the first time you are able to restore your health while in a vehicle as far as this series is concerned.

A feature that this game brings over from the previous game is the anti-sniper missions. These missions proved annoying in the previous game. In this game, the snipers are just as annoying as some of them can be next to impossible to find, let alone take down.

Generally speaking, one can say that the pace of this game is quicker than in the original game. This is, in large part, thanks to NPCs (Non-Player Characters) hurrying your along in certain sections of the game. The captain, for instance, must remain alive in the early parts of the game. If he dies, then you fail your mission. The problem here is that he tends to run ahead of you into combat. So, you are there to ultimately defend the captain from as much enemy fire as possible. While he can pick off his share of enemies, he gets himself into situations that demands your immediate attention.

Another general observation of this game is the fact that vehicles have more emphasis in this game. You can take control of more mounted weaponry to take down things like tanks and even enemy air craft. Towards the end of the game, you even engage in tank-on-tank battles. I almost felt like I was playing an upgraded version of Battletanx at times even.

While this game only had 3 missions in total, the thing to keep in mind is the fact that it builds on the previous game. With the previous game containing 5 missions, this expansion brings the total number of missions to 8. In terms of absolute numbers, this ties wit Medal of Honor: Underground. I’d argue it make this game the largest game in the series to date in the series.

The difficulty of these missions are certainly up there. In fact, I would recommend playing the original Allied Assault missions first before taking on these missions. The difficulty of some of these missions matches closely to the latter portions of the original missions. Some missions, annoyingly enough, hinge largely on memorizing enemy positions rather than skill. So, the strategy ends up being saving, going into an area to find all the sniper positions, then re-loading and picking them off. Otherwise, chances are, you’ll never make it through without dying – even on easy.

Generally speaking, the expansion does add a few new features to the game. It adds three whole new missions that can require about a day or two to complete. It has a more cinematic style of play with the sort of “look only” moments. Even though it adds to the overall gameplay of the original game, it does hinge on your experience from the previous game to get through the more difficult missions. Some missions, even then, do require a certain degree of memory work of enemy positions for success.

Graphically speaking, this expansion does contain some updated graphics. As a result, animations seem more crisp than the original game. While there is not much that makes me say “wow”, the graphics were great. The explosion effects were better realized and the environments were nicely realized.

The game doesn’t feature much new in the way of music. It recycles a lot of the music from the previous games. Still, the voice work and sound effects were nicely done. So, a decent job here overall.

Overall, this was a pretty good expansion. It increased the number of missions from 5 to 8. There are a few small features that were added to make gameplay more interesting. Still, even on easy, the difficulty is up there – especially in mission 2 and 3. You really need to have experience playing the original game in order to get through some of the mission objectives in this game. Even then, in some missions, you are practically required to memorize certain enemy positions to get a chance at success. the graphics are great after being updated to make things more crisp. The music had little new, but the sound effects and voice work. An overall good expansion.

Overall
Furthest point in game: Beat the game on easy.