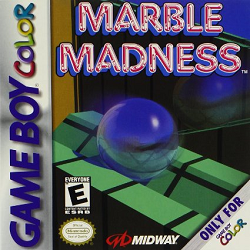 In this review, we avoid the obstacles in the puzzle racing game Marble Madness. We findo ut if the Game Boy Color version plays well.

This game was released in 1999 and is another port for this arcade game. Originally, we reviewed the NES port and gave it a great score so it was with interest that we try another port.

This game is largely the same as the NES version, so we’ll focus on the differences.

One of the immediately obvious differences is the movement of the ball. It can be easier to stop at times, but the stopping power is quite unpredictable. Sometimes it almost stops on a dime, but other times, even pushing the ball in the opposite direction won’t stop it right away.

Another change also revolves around the physics. Previously, in the NES version, we noticed that if you hit up against a wall, you’ll bounce into the other direction, but retain some of your movement. At times, you’ll find yourself stuck bouncing around in narrow passages until you slow down and start moving again. In this version, general physics surrounding walls are thrown out the window almost completely. If you brush up against a wall as you are moving along, you’ll bounce back as if you ran into a wall. This can make for some rather frustrating play at times. The physics got so bad, on the second to last ramp during the silly race, if you just barely side-swipe the side, your ball will appear close to the bottom and it’ll be difficult to even see what you are hitting, but you’ll constantly reappear back towards the bottom of the ramp. If that weren’t enough, it’s actually possible to get stuck on walls. It’s difficult to tell what triggers it, but you’ll randomly find yourself in a continuous loop of hitting the same wall as if you are bouncing back and forward at the exact same time.

If you play the silly race, you’ll notice that the tiny enemies have returned. You’ll still get the 3 second bonus for every kill. Unfortunately, the game has a hard time detecting if you ran over an enemy or just narrowly missed. As a result, the game is extremely finicky and it’s extremely difficult to run over an enemy you swore you hit 8 times by now. Sometimes, I ended up resorting to bouncing back and forth at in a narrow passage way to make it impossible for the enemy to run through, and even then, the enemy can still slink past you anyway.

Re-spawning has also changed. In some cases, it’s for the better. For instance, in the silly race, if you make it half way along the narrow pathways past the chute, you’ll re-spawn on the next platform. While that makes life easier, other re-spawning locations can make your race completion impossible. During the fourth race after you catapult yourself, it’s possible to fall down the back side of the narrow path and re-spawn on the platform before the catapult. This may seem like just a setback, but you lose so much time getting back on the catapult and launching yourself across the stage, that it makes it practically impossible to finish the next two races.

The final race (ultimate race), has some bugs. For instance, it’s possible to roll your ball into space and skip some areas. Unfortunately, the areas you can skip are very easy and the chute actually makes travel faster. Even worse is that the speed of the moving platforms have been greatly reduced. While it may make it easier to travel on, you’ll be waiting so long for the next platform, you’ll end up running out of what little time you have left on the clock before you reach the goal.

Probably one of the only positive change in this whole game is the fact that chute travel is instant. It typically took a second or two in the NES version whereas the movement was instant in this version. This might shave a second or two off, but you have to be mindful of not pushing in a particular direction as you make your way out.

The only other positive change in this game is the fact that movement is now possible on ice. On the NES version, controls are disabled while on ice and you can only hope that the momentum will carry you to where you need to go. Meanwhile, in this version, you can slide a fair bit, but you can change the course of your direction while on ice by moving the ball in the direction you want it to go.

Generally speaking, this is one of those cases where a port completely butchers a NES classic. The physics are terrible and gameplay has been rendered difficult to nearly impossible in the grand scheme of things. While there were a few minor tweaks that improve things slightly, this game winds up being thwarted by bugs and bad implementation of physics. Because of that, it’s virtually unplayable.

Graphically speaking, this game does retain a lot of the art that helped make the NES version shine. Unfortunately, it seems that shading wasn’t a strength in the technology. As a result, it’s as if some of the art was little more than a badly rendered GIF file. Still, it was actually a nice effort.

The audio, unfortunately, didn’t fare so well. The changes to the audio make you question what the developers were even thinking with this game. The melody of the first race was somewhat retained, but it is hard to even recognize it. The music of the second level was stripped out completely and replaced with a mess of hi-hats and random synthetic notes. The game is saved with a rather good interpretation of the third level music from the NES version and makes the game finally enjoyable. The fourth race, strangely, has the music from the Silly race. While it was a good interpretation without the tempo speed up, it is a bit odd hearing it in this race. Meanwhile, the silly race once again has a mess of hi-hats and random notes. With such a good interpretation being heard from the previous race, I end up screaming “why would you do this???”. The Ultimate Race, meanwhile ends up being a fairly good interpretation of the NES version. The sound effects are also quite hit and miss. The added sound effect of re-spawning was actually good to hear. The falling sound effect left a lot to be desired. The hitting of walls sounds like you are hitting a wet sponge. Really, if you make it to race 3, you’ll end up hearing the best of what this game has to offer on this front. Considering that this game had a lot of reference material to start with, audio is a disappointment.

Overall, this game started with a very good version from the NES. It had great gameplay and offered quite a bit of variety even if it was quite difficulty. All that needed to happen was for this game to be a faithful port to the original NES version. Instead, this winds up being a very lousy port with messed up physics, buggy play, excessively finicky detection of running over enemies, and an end portion that makes the game virtually impossible. The graphics were a nice try and can be forgiven, but the audio winds up being a mess with far more negatives than positives. Because of all of this, I would say this game should be avoided and gives this game a bad name.

Overall
Furthest point in game: Touched the second disappearing panel at the end of the ultimate race.
High Score: 38,483