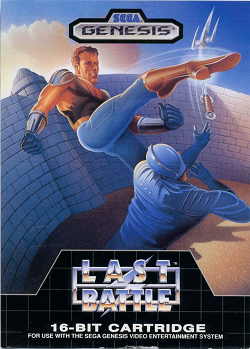 In this review, we go for a game with punch in the Sega Genesis game Last Battle. We find out how well this beat ’em up game plays.

You play as a character intent on saving the world. An extensive storyline can be found at the beginning of the game – assuming you can read at a relatively decent speed.

In this game, you have a mere one life to work with. While that sounds like an element that makes things extremely difficult, you actually get a life meter. If you defeat an enemy, your life increases by a small amount. If you take damage, however, you’ll gradually lose health.

As you beat levels, your power will increase. The amount it increases depends on the level. If you manage to fill your power meter, your fighting capabilities will, presumably, increase.

Another feature with this game is the non-linear level progression. While you always start at one level, you can choose your path through a network of levels.

You have three moves: punch, kick, and jump. Since you can’t move up or down along the ground, down will allow you to crouch.

Along the way, you’ll encounter a number of enemies. Most of the enemies seem to be ninjas. Some will jump at you. Others will charge at you. A few will perch on top of high ledges and wait for you to get close.

In addition, there are a number of obstacles you can encounter. Sometimes, these are just boxes you need to jump over. Other times, you can encounter falling swords, boomerang axes flying through the air, and even falling rocks. All this adds to the difficulty.

A number of people point out that this game is very hard. It’s difficult, but not the hardest Sega Genesis game I’ve played. While I couldn’t make it very far, I did make it a small distance in. I will agree to some extent the difficulty can be off-putting, but it isn’t as pronounced as other games I’ve played.

On the one hand, this game has a very simplistic feel to it. On the other hand, there are mazes to be had in this game that complicate things. So, while it is simplistic in that you can’t move around as freely as other games of this type, it does make up for it somewhat thanks to the multiple directions you can take after a few levels.

While the life meter does give you some forgiveness throughout the game, some of the battling you actually do is extremely simple. Enemies operate on a one hit kill basis. As such, it makes for some very simple fights. This can lead to some definite repetition in the game. The single rooms in the wooden maze level is a prime example of this. To me, this is the games biggest shortcoming.

Another shortcoming is the lack of additional lives. You run out of energy, it’s instantly game over. Because of this, the game gives off a very basic feel.

In addition, the writing does leave a fair bit to be desired. Apparently, the main protagonist can meet someone and instantly figure out if they are a “hero” or not based on looks at times. This, to me, was the facepalm moment in the game.

Generally speaking, this game ends up being simple and repetitive after a while. The non-linear paths between levels and the maze like levels found within alleviate this somewhat, but doesn’t cure it. The writing isn’t that great and the single life system leaves a bit to be desired. The difficulty, while certainly a drag in this game, isn’t the most pronounced I’ve ever seen.

Graphically, this game isn’t bad. All the characters are very nicely drawn. The backgrounds are decently animated. Probably the biggest problem is the lack of any real animation after you defeat an opponent. They just fly off the screen and disappear which makes the game look rather odd. Still, it’s a pretty decent looking game in spite of some of the shortcomings. Could have used a few more special effects, though.

The music is OK. It gives a nice bed of audio for the game, though I wouldn’t call it very memorable. The sound effects, meanwhile, are fairly basic. So, not quite up to par with your average console game at the time.

Overall, this is a fairly basic game. The non-linear path between levels is a good feature. The health bar also adds to the game quality. Multiple routs in the levels themselves also spices up the action. The difficulty can be a bit of a drag for this game. Another problem is the repetition which, to me, is an even bigger problem for this game. The graphics are pretty decent, though lacking in special effects. The audio isn’t exactly memorable, though. An overall fairly average game.

Overall
Furthest point in game: Made it to the wooden maze, but died in the falling swords area.