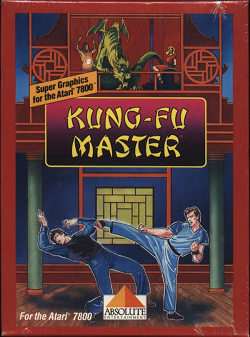 In this review, body and mind become one as we play the Atari 7800 game Kung-Fu Master. We look into whether or not this beat ’em up game is worth trying.

This game was released in 1989. It is a port from an arcade game.

You have five floors of danger to fight through. You start off on the ground floor and work your way up.

The game is one of the few games that starts off with you going from right to left. Most side-scrolling games I’ve played go from left to right. It’s the same direction as I read. So, it is a bit different going in the opposite direction right away.

To make matters more intriguing, the direction changes between levels. So, on the second level, you travel from left to right. I can only assume it goes back and forth from there because I invariably die by the time I kill the second boss.

You’ll notice two bars. One is your health while the other is the “enemy” health. The enemy health is indicative of how much health the boss has. It’s a little strange to see it stick around throughout the entire level instead of revealing itself when you see the boss, but there it is.

You have a couple of attacks at your disposal. You have the high kick and the lower kick. If you mash the buttons enough, you can also execute a punch as well. In addition to this, you have a jumping capability. Unfortunately, all you can do is jump straight up and down. Running and jumping is seemingly not an option here.

You have three lives to work with. Since it’s hard to preserve the lives in this game, you need to do everything you can to preserve them. The only thing really helping you out is the fact that if you complete a level, your health is restored. Of course, this is something you can enjoy if you can even make it this far.

One of the big problem this game has is a buggy contact system. the game works fine if your foot overlaps with an enemy. Any closer and you start running into problems. If an enemy touches you, the enemy simply drains your health completely. On occasion, you are able to get out of it. Unfortunately, even if you do get out of it, you’ll likely not have enough health left to complete the level. Because of the buggy nature of this game, it is actually much more difficult than it otherwise would be.

You’ll have a limited amount of time to complete the floor as well. From what I’ve seen, this is just there to determine how much in bonus points you get. Any extra health you retain after beating a floor as well as extra time goes into your score.

Generally speaking, the buggy contact system really holds this game back. One hold by any enemy can prove to be fatal. So, the margin of error is very slim. Considering the number of enemies, this makes the game much more difficult. The presence of enemy health in the entire level is pretty strange. The fact that you start by going right to left is also an oddity in the game.

Graphically speaking, this game is very average. The sprites are basic. The scenery is OK, but nothing huge. The effects do add a little but of flare to the game, but there isn’t much of that there.

The audio is also fairly basic. The music is surprisingly quiet during the game. The sound effects are pretty basic as well. Pretty average if you ask me.

Overall, this is a pretty buggy and otherwise average game. The contact system makes this game extremely finicky. As a result, the difficulty is much higher than it should be. The play is fairly standard. The boss health being present throughout the level was odd and the direction of travel right away is also pretty strange. The graphics are pretty average and so are the sound effects. So, decent if you are already a fan of the type of game, but nothing to get excited over.