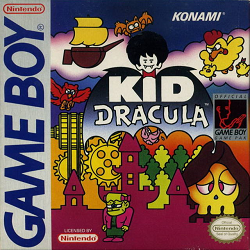 In this review, things get batty in the Game Boy game Kid Dracula. We find out well this adventure game plays.

This game was released in 1993. It’s a sequel to a Japanese only game on the Famicon.

You play the character, Kid Dracula. Garamoth has returned and challenges him. Death advises caution and the utilization of spells that has already been learned. Unfortunately, Kid Dracula has forgotten them. Assuring himself that he’ll remember them on the way there, Kid Dracula sets off to stop him.

You start off with a primary attack. Simply press B to throw a small fireball. In addition to this, you can charge up your shot to fire an even larger fireball. While the charged shot is more powerful, it also produces the side effect of turning enemies into coins. You can accumulate coins for later spending.

In addition to this, you have the only spell you managed to remember: Bat. You activate this spell, use select to scroll through the spells until you find Bat. To cast the spell, you must hold down B to charge yourself. Once fully charged, release B to activate the spell. Bat allows you to fly around for 5 seconds. This is useful for moving around the level and reaching areas that jump simply can’t get to.

In the midst of taking on the levels, you can potentially take damage. Fortunately, you do have a small health meter. You start off with three hearts worth of health. This is good for taking three hits before you lose a life.

An incredibly useful item is the boxed heart. This item not only restores your health, but also increases the maximum health by one heart for a maximum of 5 hearts. Even if you lose a life, the increased limit stays.

At the end of each level, you’ll encounter a boss. Bosses have a general attack pattern. While these patterns can be figured out, the boss fights are generally still quite challenging. Defeat the boss and beat the level. In total, there are 8 levels.

After you beat the boss, you’ll suddenly remember a spell. You’ll be given a demonstration of the spell in action as well as a brief description of what it is. In total, there are 9 additional spells to learn for a grand total of 10 spells. In one level, death will send you an item to increase your spell count, netting you two spells in a single level.

From here, you get a chance to play one of the 5 (6 if you count the game selection) mini games in this game. You are given an opportunity between each level to earn both coins and lives.

If you try and win more coins, you are taken to a lottery-like mini-game. You can guess between the 2, 4, 6, 8, or the star. Each guess is worth 2 coins. When you are done placing your bets, you spin the wheel and hope you can win more coins.

If you want to win more lives, you need to spend 10 coins per game. Still, the number of lives up for grabs is worth it. Select this and you’ll be taken to the game selection game. Each letter is associated with a different mini-game (A, B, C, and D). All you’ll get initially is the titles of each game and which letter is associated with that game. After that, you’ll play a shell-game. So, if you have a particular game in mind, you’ll be challenged to pick that crystal ball. After you select a ball, you’ll be taken to one of the four games.

The first game is Catch the Bat. There are four bats in the tree. They will randomly fly down to you. The goal is to catch as many bats before the time is up. 5 bats is worth 1 life, 10 is worth 2 lives, and 14 is worth 4 lives.

A second game is RPS. This is actually Rock, Paper, Scissors. While this sounds very straight forward, this game offers a twist. You’ll take on a computer opponent to play successive rounds of this game. You’ll have three strikes. Get a third strike and it’s over. If you win a round, you have to quickly hit your opponent before he blocks. If you lose, you’ll have to defend yourself before the opponent hits you. A tie means nothing. If you strike your opponent when you lose or tie a round, you’ll get a strike against you. For every successful clean hit, you’ll get a free life. Given the short reaction times, it’s a pretty tricky game to play.

The third game is Stick ’em. In this game, you get 17 swords. A skeleton is inside a container. There are 20 slots for you to stick a sword in. One slot will cause the head to pop off. If the head pop’s off, you lose and you keep whatever lives you’ve earned up to that point. The more swords you stick in, the more free lives you get. If you make it all the way up to the end with one last sword, you’ll have a 2 in 3 chance of winning the maximum number of lives. This really is just a guessing game, you can get a sizeable number of lives if you do well.

The final game is Jump & Pop. In this game, you are on a pogo-stick with a spike helmet. You time your jumps to go as high as possible. In the air are balloons. The lighter balloons contain either a 1up, 2up, or 3up. The darker balloons are “lose” balloons which just means you don’t get anything for it. For every jump, you can pop a balloon, so the more jumps you can fit in, the better the chances of getting something. The game ends when the time is up. If you aren’t necessarily after a whole lot of lives, but want to walk away with a few, this game is probably the safest bet as long as you have decent aim.

For me, the most useful spell is the seeking shot. Not only does the shots go towards enemies, but you can also fire a spread of 5 at a time. While useful in level, the usefulness ends up being pronounced during boss battles. In at least half of the boss fights, this got use at some point. Of course, you’ll be forced to use most of your other spells sooner or later to get past certain levels.

Probably the biggest stumbling block this game suffers is difficulty. This game starts off reasonable in the first level, but by the time you reach the first boss, this game is a challenge. After the first boss, the game grows gradually more difficult. The further you get in the game, the more you are dependent on prior knowledge of the levels to succeed. What saves this game is the fact that mini-games are pretty generous with free lives. While this allows for multiple chances, this game can be a pretty frustrating play at times.

The good part about this game is that there is a pretty decent variety of levels to take on. Some levels are pretty classic for a standard side-scrolling adventure game. Other levels feature things like roller-coaster platform sections and an upward pipe area. The dynamic landscape with moving platforms, destructible walls, teeter-totter platforms, and warp tubes, adds to this variety.

Some elements of this game can be more derivative than others. Still, if you turn your nose up at some of the elements, there’s still a lot of other thins to experience.

What does annoy me in this game is the jumping. While you are given an impressive height in your jumps, the length is a little on the short side. So, in order to make what seems like pretty straight forward jumps, you need to maximize your jumps. While some of this can be worked around with the Bat spell, it’s hard to defend yourself when in bat form – especially when there’s a high amount of enemy activity.

Generally speaking, this game has great variety in both the environments you encounter as well as what you encounter in the levels themselves. The minigames are pretty decent, though some are more difficult than others. General difficulty is an issue. While this game gives you some breathing room in the first part of level 1, the game’s difficulty will go up dramatically by the time you reach boss 1 and won’t let up. Jumping ability is an issue because of the small distance you are able to make. Judging by the title, I wasn’t expecting this to be a good game at all, but it turned out to be much more decent then I thought.

Graphics are pretty good. The level detail is well done. The quantity of different environments is also an impressive sight to see. Blurring is a bit of an issue, but isn’t too huge. Pretty solid stuff here.

The audio is not bad. While the music is decent, what impressed me is the large number of tracks found in this game. So, it’s a pretty solid effort even though there isn’t anything too memorable here. The sound effects are also pretty decent as well. A solid effort here.

Overall, I wasn’t expecting this game to be all that great when I saw the title. I was pleasantly surprised with the small bits of humor thrown around as well as some pretty decent gameplay to be had here. The variety in both levels in general as well as what you encounter in the levels is pretty good. The difficulty curve is, unfortunately, pretty steep. Even with the added lives, this still can be a frustrating play at times. The jumping system does leave a lot to be desired as well. The graphics are pretty solid – especially with the quantity found in this game. The quantity also helped out the audio here as there is a lot of music to be had here. An overall pleasant surprise and solid game.