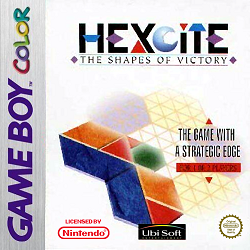 In this review, things shape up in the Game Boy Color game Hexcite – The Shapes of Victory. We find out if this strategy puzzle game plays.

There’s a few basic modes. You can play a single player round against the computer opponent. This doesn’t earn you anything special (save for a rumored extra difficulty), but it can allow you to get a feel for the game. There’s a two player mode that allows you to go against a fellow human player. The final two modes are level play and practice mode.

Curiously, practice mode is actually a sort of puzzle mode. You are given a limited number of pieces and limited areas in the playing field to play. The goal is to exceed the computer opponents score. A tie doesn’t count as a win. So, this challenges you to find the solution once you have a good feel for the rules and how the game plays.

Finally, there is level play. In this game, you can gather experience points and level up. Three save files are even offered in this mode as well.

By default, the game is set to 10 rounds. The player with the most points (not victories) is declared the winner here. Generally speaking, this is a somewhat lengthy battle, so I personally found 4 rounds to be much better as it gets the job done nicely.

The game revolves around shapes. The board is a hexagon with a hexagon touching every side of the center one. The starting zone is in the center. In the first play, the shape you use must fit within the center. Every shape after that must connect fully with a side in order for it to be a valid move.

The outer hexagon’s are called zone’s. Each zone is worth points. The hexagon with three dots is worth 30 points. Meanwhile, the remaining hexagons with 1 dot is worth 10 points. The player that puts a final piece in to completely cover that zone will earn those points. If you were wondering, the center zone doesn’t count for anything in and of itself.

Of course, scoring goes much further than taking the outer zones. Each successful play is worth points. In the initial play, the more outer edges of the center hexagon the first shape touches, the more points. Each side the shape touches is worth 5 points. From there, it’s all about what exists on the board itself. A shape that touches one edge is worth 5 points for you. If your shape touches two sides, that is worth 10 points. Every additional side the shape touches is worth an additional 5 points. The maximum possible score you can get is 30 points, though this is highly unlikely.

At the end of every round, the game will tally all remaining unused shapes. Every unused shape gives a player a penalty. What that penalty is depends on the shape. The penalties can be anywhere between 15 to 30 points per shape. Because these penalties are so steep, this can be used to the players advantage by making sure the maximum number of shapes is left on the opponents side of the table.

Strategies to do so can include making sure all possible move has an incomplete side. If there is a hole on one side, then the move cannot be made even if other sides are touching completely. Other strategies can involve blocking the opponents play by filling in spaces with shapes that don’t really fit that well.

Other strategies involve offloading as many awkward pieces as early as possible. If all you are left with are diamond, small triangles, and even a few trapezoids, it’s much harder for the opponent to deplete the number of moves available to you.

Generally speaking, the first thing that came out to me is the learning curve. This game has a very steep one to overcome and very few avenues to overcome it outside of trial and error. My method of just playing a single player game with no consequences for losing appears to have been the best method. Still, even on the easiest setting, losing continuously is a very common sight when you are just starting out. The computer player will seemingly get far more points for moves even if you are using the same shapes. Often, the computer player will exploit basic mistakes new players make and pull ahead early. This will, in turn, make the rest of the game a huge struggle. It take a bit to learn at the beginning if you are coming in cold like me.

Once you do get the basics down, however, this game does become a bit easier to figure out. You can formulate strategies and work the math to execute the move that earns you the most points. Figuring out blocking patterns becomes something you can strategically start doing at certain times in the match. You can force penalties on your opponents along the way and give yourself a sizeable lead. As a result, the difficulty curve becomes quite reasonable – especially in the level play mode.

Of course, don’t be fooled by the earlier difficulties. The computer player difficulty has no problem matching your level of skill and will continually challenge you with increasing efficiency. Eventually, the computer opponent will be too good for you and won’t allow you to advance much further after a while. So, enjoy winning while it lasts because it does come to an end sooner or later.

One feature I’d like to see in this game is some sort of solitaire mode. This not only might have made the learning curve much more bearable, but also might open up an interesting mode of play in the process. More features would be nice to see in this game, that’s for sure.

Generally speaking, this is one of those games that takes a while to learn. It takes a fair bit of problem solving just to figure out how this game even plays. Once you get over that initial learning hurdle, this game becomes much more playable. This game has a number of ways to play, and as such, makes for an interesting play. While there are a few ways to play, it would’ve been interesting if there were things like solitaire play. A mode like that might have saved some headaches for new players.

The graphics are very basic in this game. While you can change the color pallet in the options menu, this has to be manually set between matches. Probably the only real good thing in this game is the effect once a zone is won or if you defeat the computer opponent. The backgrounds is very basic and the menu’s are barely passable. If there were themes like a green felt, or a wooden table, or even some exotic locations, that might have made this game more interesting. As it stands now, it’s barely passable.

The music is OK. Unfortunately, this too also has to be manually set between matches. While there is a total of 10 tracks and an 11th silent mode, the music can get a little boring after a while depending on the track. It would have been better to have the ability to toggle the music during the match at the very least. Even better would be the music changing as the rounds progress. The sound effects are OK, but nothing huge. Generally speaking, it could have been better.

Overall, this game proves to be surprisingly strong. The initial learning curve is not only steep, but a real pain. Once you get past that, though, the layers of logic and strategy become apparent. This gives the game a nice amount of dimension. The game could have had a few extra modes beyond the two player duel to make things more interesting, but what is there is pretty decent. The graphics are pretty basic and the audio isn’t that well thought out, even if some of the tracks are OK. A pretty good game overall in spite of these flaws.

Overall
Furthest point in game:
Level stage: Earned a B5 ranking and earned a total of 114 experience points.
Made it to problem 11 on practice mode.