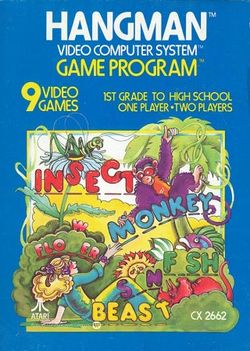 In this review, we try and work the letters in the Atari 2600 game Hangman. We find out how well this educational game plays.

The game follows along the standard rules of Hangman. Some games are single player while most of the others are two player games.

While playing, you need to select a letter. Obviously, some letters are more common then others. Vowels are required to form words. You can either go the vowel rout or the Wheel of Fortune final puzzle letter rout (R, S, T, L, N, E).

If you try a letter not found in the word, you’ll get a part of the Hangman drawn. If you get 11 letters incorrect, you lose.

The words used in this version of hangman are quite short. It’s a mere 4 to 6 letters long. So, your margin for error is a little more narrow. Do know that this game won’t hesitate to use words with less common letters such as Y, and W.

As you pick letters, the letters that have already been used will be removed from the alphabet. You have to move to another letter in order for this to take place.

While this game is marketed for people as young as first grade, chances are, this is more for the older end of the advertised end of things – people going into high school. Some skill in the English discipline certainly helps, but even that can only take you so far at times.

The problem with this game is that the limited letters in puzzles mixed with only 11 chances means that you are sometimes reduced down to a fair bit of luck to get you through. If the letters R, S, T, E, O, and, N don’t happen to be in the word, for instance, you’ve already used up over half of your chances.

Another problem is user friendliness. It would have been better to see the whole alphabet and see the letters disappear as you went along with your guesses. As it stands now, the game forces you to go through every letter one at a time. This makes for some clunky game play.

Generally speaking, the game does require a little luck. The advertised earlier ages of Grade 1 seem like a bit of a stretch given the difficulty. The gameplay itself is a little clunky as it forces you to scroll through 1 letter at a time and only allowing you to see one letter at a time.

The graphics are OK for the time, but there is better out there. They more or less get the job done, but it isn’t exactly the greatest of graphics.

The use of ABC notes while you select letters is a pretty creative use of sound. The buzzer sound might be a bit excessive given the target audience. A softer sound might have worked better.

Overall, this game is pretty touch and go. It is marketed for people as young as Grade 1, but it’s more likely that people in the early high school range might make better use of this game. I can see grade 5-7 kids using this, but Grade 1 seems like a stretch given the difficulty and interface. The way the letters are selected is fairly clunky given that it shows you only one letter at a time. With 11 chances to spell out a 4 to 6 letter word, some of this gameplay boils down to a little luck. The graphics are about average, but the sounds aren’t so bad save for the buzzer. A passable game, but nothing impressive.

Overall
Furthest point in game: Decided to play 10 rounds and lost 2 out of 10 rounds.