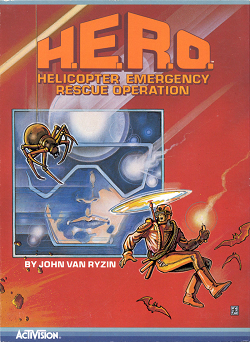 In this review, we go on another rescue mission in the Atari 5200 game H.E.R.O. We find out if this adventure game is worth a play.

You play a character that uses a helicopter pack to fly around. Your main objective is to rescue trapped miners at the bottom of various shafts deep underground.

You have two weapons at your disposal: a laser and dynamite. The first weapon you use is the dynamite. To use, you set it with the one button. You must run away quickly because the fuse is extremely short. This weapon blasts away breakable walls including small red flashing breakable walls.

The other weapon is your laser weapon. This shoots laser from your head. It is great for eliminating a few enemies along the way.

The first level is fairly straight forward. You blast away the first rock, then make your way down to the miner to save him. touch the minor and you’ll beat the level. For all the energy and dynamite you have left over, you get bonus points. So, getting there efficiently, yet quickly is great for getting a lot of bonus points.

While the first level or two are quite straight forward, levels further along are much more complex. You need to pick correct shafts down and avoid hot surfaces (denoted by flashing red walls). It’s very easy to die in this game, so taking care is crucial.

There are a number of enemies that are also impeding your progress. These enemies include spiders, bats, and snakes. Spiders stay in one location. Bats fly around a small area. Snakes poke their head out of the solid rock face and try to bite you. Since everything is on a one hit kill basis including yourself, everything is deadly. Still, if you get killed by an enemy, that enemy will disappear when you go on to your next life.

One thing that is annoying about this game is the instant death throughout the levels. At first, it’s just a matter of avoidance. In later levels, instant death happens when you just happen to pick the wrong shaft to go down. In all but a small handful of instances, you really have no time to react. You just lose a life. You have no idea where all the enemies are, so you are reduced down to picking randomly.

Because of this, you are gradually leaning more and more onto memory work to complete some of the more advanced levels. As a result, this isn’t a game about skill as much as it is about memorizing levels just to survive. I find this aspect to be annoying personally.

Another problem with this game is the controls. There is a delay between when you push up and when your character actually takes off. This wreaks havoc on your timing whenever timing is a critical thing.

One good thing about the game is that the levels have a nice degree of complexity. You aren’t stuck with single screen levels. There are interconnecting passageways that aren’t randomly generated. This makes it feel like you are playing a much more complete game instead of something that was quickly hacked together. So, the content/quantity is there.

Generally speaking, this game is somewhat difficult and only grows more difficult from there. The fuse times are short with the dynamite. The maze requires memory work more than skill. The controls have a slight delay in some cases. Still, the quantity of levels and length of different levels works in this games favor. So, I would say it’s not a bad game if you can plug your nose about the whole memory requirement.

The graphics aren’t bad. I really like the changing color pallet between levels. The character is pretty well rendered. The enemies are half decently rendered as well. The only thing I would like to have seen is some hints of texture in the background. As it stands now, it’s just a bleak back background. Otherwise, it’s pretty solid.

There is no music, but the sound effects are pretty decent. It’s not enough to carry the game into something passable in this area, but it is a good effort.

Overall, this is a pretty decent game. On the downside, this game forces you to rely heavily on memorizing the levels more than skill. The controls occasionally have a delay on them. Still, this game has quantity going for it. It features interlocking levels that are not randomly generated. The length of some of the levels later on is quite good. The graphics are pretty good, though it could use a background texture. There is no music, but the sound effects are pretty solid. An overall decent game as long as you can work around the memory thing.