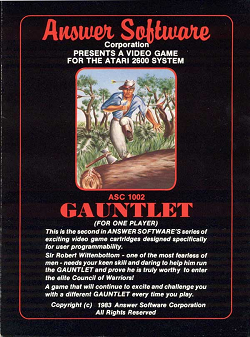 In this review, we check out an Atari 2600 game called Gauntlet. This game is not to be confused by the hack and slash game series of later years. We find out if this survival game is worth trying.

In this game, you control a character through the worlds longest peninsula that features various hazards like arrows, logs, trees, and what appears to be wildlife.

The game features a person, but the controls resemble a car more than an actual person running. So, forward is basically accelerate and back is more or less your brakes. Left and right allows you to move, well, left and right.

It seems that the objective of the game is to reach a black Olympic-like torch after a certain amount of distance before the “timer” (which basically looks like a pit filled with water that gradually drains) runs out. If you run into anything, you lose a line of “time”. If you reach the torch, the timer resets and allows you to continue on. The problem is that with each leg you reach, the playing field gets narrower and the obstacles can move faster.

You can jump over some objects with the jump button. These obstacles include logs.

Also along the way is objects that appear to be shorter versions of the character. I mistakenly thought this was a free life, but in reality, this was just a 250 point bonus with the sacrifice of some time. So, if you feel like risking having less time by collecting points, then you can touch these objects on your way through.

One exploit in this game is the fact that you can just stop and walk back and forth on these objects, netting you a really high score in the process. This seems to be far easier than just running to the checkpoints for a high score.

Graphically, this game was decent for it’s time. It wasn’t anything too special, but it wasn’t bad either.

The audio contains one music track. If you trip and fall, you are treated to a somewhat bad version of Chopin’s death march. Otherwise, this game features a small set of sound effects that includes a jump sound effect and a sound effect for collecting the bonuses.

Overall, this game was decent enough. The controls are a little less then realistic, but the game play is decent enough. The goal is a little unclear (do you go for a high score or go for the most legs completed?). The difficulty curve, however, was a bit steep as I never got past leg 3, but the legs are quite long, so offers a nice small amount of gameplay in the process. The graphics was basic and the audio was touch and go, but it still makes this game an interesting one.