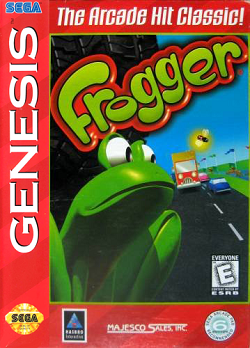 In this review, things get a bit green in the Sega Genesis game Frogger. We find out how well this strategy game plays.

This game was released in 1998. If you’re like me, you’ll be doing a double-take on that year. No, that is not a typo.

Since this game plays so much like the Game Boy Color version, we thought we’d focus on the differences between those two versions.

One difference is the fact that there are a few additional things swimming around in the water.

Another difference is the fact that there is no hall of fame at the end. Once you run out of lives, it is game over and you get booted to the main menu screen after.

Graphically, to me, it is absolutely shocking that this is a Sega Genesis game. By the time I got to the actual game, I could’ve sworn I was playing a stripped down early NES prototype of some sort. The menu’s are bare bones and the gameplay graphics are very NES like. If this was a game mode within the game that was called “classic” and this was in it, I could understand. The fact that this is the whole game makes my jaw hit the floor at how awful it is for a Genesis game.

Compounding the problem is the fact that this game was made in 1998 – a year I swore was a typo of some sort until I could verify through multiple sources that this is accurate. The reason this is so shocking to me is because this is the same year games like Diablo, Gran Turismo, Rampage: World Tour, Spyro the Dragon, Turok 2 – Seeds of Evil, and Vigilante 8 was released. Heck, even looking at handheld games, you see Wario Land II, Bust a Move 2 – Arcade Edition, and Army Men being released in the same year. I look at this game and say, “Are you kidding me?”

The menus are so sparse, they look incomplete. The graphics are barely passable a console generation ago. While there are a couple of pictures here and there that are remotely passable, these same pictures are also found in the Game Boy Color version – released in the same year. The graphics here, as far as I’m concerned, are shockingly bad.

The audio is a very similar story. The chip-tune versions of public domain music, although varied somewhat nicely between runs, do this game very little justice. The sound effects are also very last generation as well. Heck, you could make the case that it is technically two console generations out of date.

Overall, the best thing you can say about this game is that it has a lot of similarities to the original arcade game. Beyond that, as far as I’m concerned, it is probably one of the biggest flops I’ve played on the system so far. While the game is playable, it is decidedly lacking in pretty much every other aspect for a console game at the time of release. This game should be avoided.