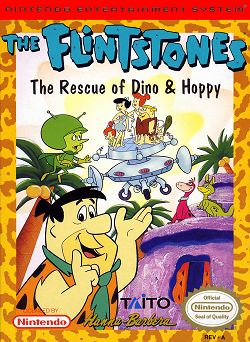 In this review, we go down to the town of Bedrock while playing the game The Flintstones: The Rescue of Dino and Hoppy. We find out how well this NES adventure game plays.

This game was released in 1991 and is one of many arms for the Flintstones franchise. It was also the first game released that depicted The Flintstones.

The story is that Mr. Butler, a time traveler, has gone back in time and kidnapped the pets Dino and Hoppy. He also blasts apart the other time travel device a green alien character was driving around in in an attempt to prevent them from chasing after him. Fred embarks on a journey to obtain all of the time machine parts so the machine can be reassembled. Not exactly off to a good start, there.

Fred has two attacks. He has the main attack of swinging his club. This generally inflicts more damage, but is very short ranged. The other weapon is one of three items you pick up: the rock axe, the slingshot, or the egg. The axe flies up and down, so you need to get the right distance in order to hit your mark. It allows for attacking things up above which is very useful. The slingshot fires a rock straight forward. While useless at attacking enemies above, it is very easy to control for enemies straight ahead. The egg is something you drop. It eventually explodes and damages every enemy on screen (not sure of some bosses are immune to this though). These attacks require you to hold up while attacking.

The secondary weapons cost money. Throughout the game, you can collect coins (typically dropped by numerous enemies). This recharges your shots in a very Castlevania style of play.

Many items you collect are found in barrels. While some items don’t seem to have much of any use, other items do help you. The hamburger will increase the total health you have for a maximum of 5 hearts. The heart will restore all of your health. The Fred icon gives you a free life. The three weapons can be collected, but you can only use one. Collecting another icon will discard the previous weapon.

You’ll have various enemies that stand in your way. Some enemies are small and won’t drop anything. One such example are bats that fly at you. Other enemies run or jump at you including other cavemen, robbers, and kung-fu fighting cavemen. These enemies generally drop coins once you defeat them.

At the end of most levels, you’ll encounter a boss. Bosses will require multiple hits to be defeated. If you defeat the boss, you’ll (most of the time) obtain a “TM” icon (presumably standing for “Time Machine”). You’ll also get to start each new level with full health.

A feature in this game is three basketball levels. You have a one minute round against an opponent. You can jump to help make your shots. You can also attack by hip-checking your opponent in an effort to steal the ball away from said opponent. The difficulty in these matches is the fact that not only do you have to position yourself just right to score two points, but you also have to time your shot so that the bird will have its mouth open in order for you to score those points. Otherwise, the ball will just bounce right off. The rule is that you have to have more points then your opponent before the time is up. A tie automatically means you lose. This is probably one of the few good features as it does break up gameplay somewhat while not being too obtrusive at the same time.

One final feature of note is the world map. Through this map, you can travel between levels and tackle them in different orders (though some levels are linear in nature). In total, there are 7 levels and 3 basketball levels.

The difficulty in this game is more towards the more difficult side of things. Some areas aren’t so bad, but you’ll encounter a number of situations where precise timing and/or jumping are essential just to survive. The most frustrating example of this is the dungeon level with the rising lava room. So, the difficulty will spike from time to time.

A big problem with this game was that it is remarkably short. With just 7 levels and 3 basketball levels, it is more than possible to either beat this game or have your fill in the span of a couple of hours. Either way, there isn’t a whole lot to this game.

Another problem with this game is the fact that it is very derivative. It takes a lot of ideas (Castlevania weapon system, Mega Man 2 moving platforms, Super Mario Bros 3 underwater and ice levels, and offers very little original content. Don’t expect anything particularly original here.

To make matters worse, it can be difficult to really eye your jumps. A big feature in this game is Fred’s ability to grab and climb some ledges. While an interesting feature, it seems that most of this game revolves around this system heavily. Once you master this, the only threats for you will come from bosses and regular enemies.

Generally speaking, this game is long on pitfalls and short on positive elements. This game brings very little, if anything at all, new to the table while borrowing ideas from other games in the process. It is exceedingly short, has numerous difficulty spikes, and even has a bizarre futuristic time travel aspect that makes it look like the producers were trying way too hard to produce something original.

Graphically speaking, this game is passable, but not exceptional in any way. There is the occasional geographical feature such as the dinosaur bones that Fred must traverse that makes things interesting. The animation of Mr. Butler was interesting in his various stages of defeat, and the cutscenes at the beginning and end are decent enough. The dialogue parts are OK. Still, there is nothing really exceptional that makes this game stand out from other big games that year – such as Super Mario World and Sonic the Hedgehog. Flickering is also a bit of a problem in this game.

The audio wasn’t any better. It suffers in that there are already so few levels to begin with. In addition to this, the music also repeats in some levels. There is nothing all that special with the music with the only standout being the intro music. Sound effects were also nothing special.

Overall, this game was a flop. It has numerous weaknesses such as very short game play, numerous difficulty spikes, and very little original content. While the basketball levels did help break gameplay up a little, that was overshadowed by the bizarre time travel elements thrown into this game. The graphics were nothing huge even with the occasional level feature that makes things interesting. The audio wasn’t the greatest either with music that wasn’t particularly special and sound effects that didn’t really make the grade. In general, I’d say that there are a lot better games to be had out there, so it might be an idea to give this one a pass.