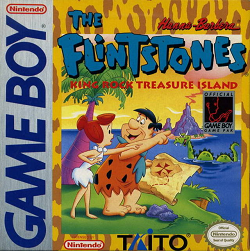 In this review, we return to Bedrock in the Game Boy Game The Flintstones: King Rock Treasure Island. We find out how well this adventure game plays.

This game was released in 1992. We previously reviewed the NES game The Flintstones: The Rescue of Dino and Hoppy. We found that game to not be that great. So, we decide to give another game a try.

In this game, Fred is contemplating an anniversary gift for Wilma. While working at the rock quarry, he finds a treasure map chiselled out on a rock tablet. He decides that this treasure will be used for his anniversary gift. He takes the map, bids farewell to everyone and sets out on his adventure.

The attack system in this game takes on a utility role. Fred throws stone hammers at enemies. If you hit an enemy once, this stuns it. The enemy flashes and, for a limited period of time, the enemy is unable to move. The important thing here is the fact that you can stand on an enemy while it is stunned. If the enemy jumps before it is stunned, it’ll remain frozen in the air. This allows Fred to jump up to higher platforms.

After a period of time, the stunned enemy will shake and begin to move again. Sometimes, you are able to stun the enemy again, but other times, an additional hit will eliminate the enemy.

If you so choose, you can hit the stunned enemy again to take it out.

The mechanics of stunned enemies is required just to make it over the first ledge. At first, I thought this might be something that plays a minor role in the game. In the end, this concept plays a critical role in almost every level in the game. In one instance, you have a massive gap that can only be crossed by stunning enemies and jumping from one stunned enemy to another. So, mastery of jumping on enemies is crucial for your success.

Also along the way are various items you can pick up. There is the rock wheel that increases your score. In addition, there are alien icons. Collect 20 icons to get a free life. Your tally can be seen only when you pause the game.

Probably the most useful item you can collect is the Dino icon. Collect this item and you get to ride Dino. With Dino, you can jump significantly higher. You can also run more quickly. The downside is the fact that your characters mass goes up substantially, so dodging enemy shots or squeezing through tight spaces can become more problematic. If you get hit, you lose Dino and go back to traveling on foot.

Unlike some games, this game utilizes a health system. You have four hearts total. For every hit you take, you lose a heart. It is possible to replenish your health by collecting the heart icons. Unfortunately, heart items are quite rare, so it isn’t the wisest idea to just rely on finding more.

At the end of some levels, you’ll encounter a boss. While you have no way of knowing how much health the boss has left, the game does indicate when you beat it. Some bosses only have one phase. A few of them, have three phases (namely the later bosses). No bosses have anything particular objective other than just hitting them enough times to take them out. Just whack away until the boss finally goes down.

There is only one mini-boss in the game. This boss is located on the ship level. Again, nothing special, just take it out with your attacks.

A few levels are driving stages. If you’ve played James Bond or Moon Patrol on the Atari 5200, the stages operate very similarly. To make your vehicle go faster, you hold down right. To slow down, move the car to the left. Speed control is very important for your survival. Of course, jumping (not that this makes much sense in a car) is also hugely important. Jump over barriers, pits, and other obstacles to keep moving. Also, try to avoid those falling rocks from the volcano’s if possible.

One final note are the enemy generators. Be on the lookout for the cow skulls. If you see one, know that there will be a constant stream of enemies flowing from it. What enemy comes out varies from skull to skull, but it will always be consistently the same enemy. If a slug pops out of the skull, only expect slugs to come out from there. If it’s a robot, then only robots will come out of the skull. This isn’t inherently bad. Some skulls are critical for crossing large gaps. It’s just something to keep in mind whenever you see them.

Generally speaking, what stood out for me in this game was difficulty. This game isn’t impossible, but it certainly is a very challenging game. In some areas, you not only need prior knowledge, but also a little luck. This is especially true in later levels. There’s no way of knowing what enemy was generated when until you have already committed to a certain jump. You can be reduced down to just jumping and hoping for the best. Sometimes you are lucky, while other times, you know you’ll get hit and sent into a pit.

Part of the problem with difficulty is the heavy reliance on stunning enemies. I can see high ledges containing special items as something you need to pull off successfully, but more often then not, this skill is needed for your very survival. You can’t beat many levels without stunning and jumping on enemies. Arguably, this game replies way too heavily on this mechanic and could have thrown down different challenges for players instead.

One good thing about this game is the variety of levels. Some of them are rather strange (mainly with Fred seemingly having gills in the underwater level), but it did add some variety to the game.

It would have been nice to have a better idea of what some of the items do. I’m not even sure if the wheels play any role other than giving you points to be honest, but I can’t say for certain.

One final problem I have with this game is the writing. The writing seemed rather weak in the cut scenes. The beginning cut scenes were especially painful to me. While the overall plot concept isn’t bad, the more specific dialogue isn’t the greatest in the world.

Generally speaking, the big problem is difficulty and an over-reliance on the stunned enemy system. The variety of levels is interesting, but the dialogue could have used some work. It’s OK, but nothing special.

The graphics are fairly decent. Some levels could have used some extra detailing to avoid the issue of blank space. Blurring can also be a bit of a problem in some cases as well. It’s OK, but nothing huge.

The music is pretty decent. Nothing outside of the main theme is particularly memorable, but the music isn’t bad. The sound effects have a range. Some of them are great, but others are simply odd. The sound effect you get after beating the level is pretty odd to me. So, a passable experience in general.

Overall, this game is OK, but nothing huge. the difficulty held this game back. This is compounded by an over-reliance on the stunned enemy system. The writing is also, at times weak. Still, the variety of levels to be found in this game is pretty good. The graphics are decent, though the detailing can be a bit sparse. Blurring is also an issue for anything particularly fast paced. The audio is decent enough, but nothing huge. An overall average game.

Overall
Furthest point in game: Beat the game on my last life.