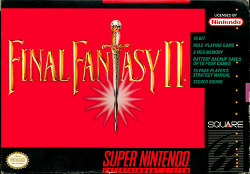 Final Fantasy II for the SNES was released in 1991 and would be one of the titles renamed for North American markets. In the original chronology, this game is actually Final Fantasy IV. We’ve reviewed two other games in this series already. The first was Final Fantasy VI which is, as of this writing, one of only two games we’ve reviewed with a perfect score. The second game was Final Fantasy VII. While critically acclaimed and considered by some as one of the best games ever produced in the era, for us, the game lives in our top 10 worst games of 2013/2014. A real surprise for us to say the least that it ranked so low. Still, we haven’t given up on the series and we decided to give this series another chance with this game.

The game starts off with you controlling the main character Cecil. He is a member of the Red Wings on a mission to steal the water crystal from a peaceful kingdom for the main protagonist for much of the game, Goblez. By the time Cecil returns with the crystal, he expresses his confusion about the mission. His questions are treated with questions about his loyalty. He eventually is asked to deliver a package to a city the next day. Between his questioning loyalties and venturing into a world with increasing numbers of monsters appearing, you basically hang on for one wild ride.

There are three main portions in this game: an overworld, dungeon/cave areas, and towns. Towns are the only place where you do not run into random enemy encounters. Everywhere else, however, is a different matter entirely. As you progress through the game, you encounter gradually more powerful monsters and bosses. Generally speaking, the difficulty balance is a bit on the steep side, but the game starts you off on a very good footing to allow you to develop your characters strengths. Occasionally, you may want to do some grinding just to make you life a little easier in areas that are ahead of you.

You have an options screen that you can activate most of the time to change what you experience in the game. This can range from changing the colors of the menus to examining your inventory and equipping items to name a few things. Your inventory is quite large, but given that you can hold up to five characters at a time in your party, spaces can be used up rather quickly. One space saving method is the “sort” feature which allows you to make items that are the same count more even though they take up one space. You can have up to, for example, 99 cure1 potions to take up a single slot. Other items include ether1 for restoring magic points, tents and cabins to restore your party on either the overworld or on save points, life potions to recover fallen party members, and heals which restores all other status ailments (yup, more or less a cure-all item).

Randomly, you’ll encounter enemies outside of towns and castles. This is definitely the most common way you’ll encounter enemies. The more enemies you defeat, the more experience points you earn. If you earn enough experience points, you’ll level up. Levelling up increases things like hit point capacity and other minor stats. While offense and defense more or less improves in subtle ways, the main way you improve your overall offense and defensive powers are through increasingly effective items you can equip. Some of these items are found in treasure chests while others can be bought in stores you encounter along the way.

You’ll also encounter bosses. Some bosses are there to simply impede your progress while others advance the plot. Typically speaking, they are harder to defeat, but offer a nice bump in experience points and gold.

One aspect of this game is the large number of playable characters you’ll have. They include Tellah, Kain, Palom, Porom, Edward, Rosa and Rydia. For a vast majority of the game, you have basically no control over who is and isn’t in your party for the most part. Characters you can select to be in your party is reserved for the end of the game. By that point in time, it’s almost pointless to change up who is already in your party. On the one hand, it adds variety to the game and you get to see what everyone’s strengths and weaknesses are. On the other hand, you spend a bunch of time developing your characters to survive certain parts of the game only to have that character either die, disappear, betray you, or otherwise leave. It’s one thing to have two or three character go on you for plot driving purposes. It’s another for the game to force you to rebuild every character from the ground up at some point. No character is immune to this. The most stable character in the entire party is Cecil and he gets knocked all the way back to level 1 at some point in the game. I found this element to be extremely annoying more than anything else.

The storyline was an interesting thing to judge as it unfolded. At first, I thought this was going to have a very strong plotline much like Final Fantasy VI. It had that feel all the way to when your ship sinks into the ocean. From there, the plot just seems to just dive in quality where Goblez is always able to take the crystals. You never have any crystal for more than a few minutes before you are forced to give it up or have it stolen from you. when Goblez gets all four crystals, you can get that sense of the writers writing themselves into a corner. The only way to get out of it is to just have Kain remember that there are four more in the under world. I think a better job could have been done at at least hinting that the four in the overworld aren’t the only crystals in existence. Then, when you get to the underworld, you learn that Goblez already took over half of them and is closing in on the last crystal. This got real old and became an annoying element in the game and a part of me wonders if there was a missed opportunity here to expand on the game. The writing for each character was hit and miss. Palom and Porom had some character development behind them, but others ended up being little more than a cookie cutter stereotypical karate character. The plot picked up a little towards the end of the game, but it was hampered by tired old plot twist family related tropes.

Probably the best part of the game ended up being the battle system. Different strategies could be formed such as creatively casting wall on an enemy that constantly heals itself or casting float on enemies that cast quake. You can easily utilize characters to fulfill different roles such as the healer, the attacker, and the spellcaster. You can cast spells that affect one enemy or all of them at once. Different enemies have different strengths and weaknesses and you can play to them accordingly. This was definitely enjoyable, but the grinding does get a little old after a few hours.

One thing I didn’t like so much was that advancing the plot can prove difficult at times. Probably the first big example of this is finding the Magma key. You find the Magma key and are told it’s used to unlock something. Where do you go? You’re clue is “I don’t know”. You have an airship, so the lock could literally be anywhere – let alone be anything. In this case, you had to figure out that it’s not your standard lock as you would imagine it by any stretch of the imagination. I would imagine most players did what I did and just said, “Screw it” and look up the guide to find out where you use it just to get further ahead in the game (if you didn’t just give up at that point in time in the first place). This isn’t the only time where your clues are ridiculously vague either, so that took away some of the enjoyment of the game.

Generally speaking, though, enjoyment can definitely be had in this game. It takes a fair amount of gameplay to get to these roadblocks. Developing the characters to be stronger as you go along can be kind of fun, but hampered by the constant forced reshuffling of characters. If you want to try a game that you don’t intend on completing, this can prove to be an interesting play. For a lot of people, I wouldn’t be surprised that this game turns out to be one of those games that was fun, but not something people completed very often.

Graphically, for a game of this era, this was actually quite good. Keep in mind that there were plenty of NES games being released at this time. There was plenty of different enemies you can encounter and retexturing doesn’t happen all that often on enemies. In some small portions of the game, it was possible for your character to walk behind objects which indicates some minor amounts of layering. There are also “false walls” where, in most cases, have a slight discoloration to show that you can pass through this area. This game also employed different animations for different attacks. What exactly it looked like depends on which weapon (let alone type) you had equipped or what spell you had cast. I would say it’s quite well done overall.

The music was another strong element in this game. While not as stunning as Final Fantasy VI that was released a few years later, it still had its strong points. Some of the opening music was quite nicely done. The minor boss battle music might sound familiar if you’ve played the sixth game in the series. Other tracks found in this game were OK, so the music ranged from decent to great. The sound effects were nicely done as well between some of the ambiance to the general sounds you hear when doing different things. Quite good overall.

Generally speaking, this can very easily be that game you played that had plenty of fun, but never really completed. No shame in never completing this game as some parts practically require you to look up a guide. There was a very nicely developed battle system, though the difficulty curve requires a bit of grinding from time to time so the game doesn’t become extremely difficult. The graphics were quite well done for a game of its time and the sound was very nicely done. The writing often left a lot to be desired and the constant reshuffling made things frustrating from time to time. Still, it’s not a bad game to play. If you’re looking for another RPG game to play from the SNES era, this wasn’t bad.

Overall
Furthest point in game: Completed the game (with help from a guide). Cecil was levelled up to the mid 60s, though apparently mid 50s can be sufficient to completing the game.