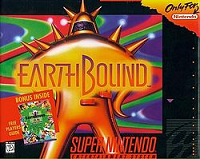 Earthbound is the first Super Nintendo (SNES) game we are reviewing. This RPG game is often considered one of the most under-appreciated games of all time. After playing this, the term “under-appreciated” is very well deserved.

EarthBound, also known as “Mother 2”, was released in 1995. It is an RPG video game that depicts a boy and his three friends who are destined to defeat the great evil Giygas.

The game starts off with a high customizability. You get the chance to name your characters (or stick with the defaults by selecting “Don’t Care”). It even asks you to name your pet and your favorite food – all of which affects the overall game in an insignificant, but fun way.

You begin with being woken up by a meteor crashing into the nearby mountain. You eventually meet Pokey who is a neighbor and, initially, a friend. After a while, you learn that you are to fulfill a great destiny where you basically save the planet.

Perhaps the only downfall of this game is the cheesy story-line as it’s more or less a cookie-cutter kind of premise. However, as you progress, you get to tackle some interesting puzzles, and have the game unfold in ways that would probably be considered unique to this day.

The gameplay is also innovative with the rolling of the hitpoints. If you get to the point where you have a hundred or so hitpoints, you can appreciate the effect this has in battle sequences such as frantically trying to heal after receiving a mortal blow. In fact, it kills me to know that very few games before and since then ever employed this hitpoint system that is simple, yet provids the button mashing panic that keeps your interest flowing.

The graphics for this game is quite well done considering the system it was on. You get a whole host of interesting and sometimes psychedelic backgrounds of the battle sequences while also getting the somewhat cartoon-like style of wandering around the various worlds.

The sound is very well done. The music is often remixed because it was so well sequenced and the sound effects provide a nice unique touch to this whole game (such as the sounds of equipping something and attacking something during battle to name two examples).

The game can be somewhat challenging through the various puzzles you’ll encounter, but the real strategy that’ll carry you through the game is figuring out what is a time-effective amount of grinding you’re willing to go through before challenging the next boss. Just run up to the boss and you’ll likely have a hard time surviving the battle. Put to much in, then, the boss might be easy, but you could have better spent that time taking on monsters in the next level that provide way more experience points.

Overall, this game was quite a joy to play and it saddens me knowing so few games are even remotely like this game. Well worth it to play even if you’re a passive RPG gamer.

Overall
Furthest point made it in the game: Beaten the game three times. Third time had all characters reach level 99.