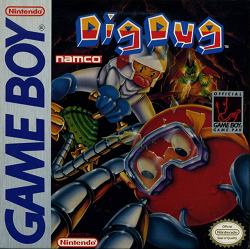 In this review, we give another version of Dig Dug a try. This time, we are burrowing through the Game boy version of this survival game.

This game was released in 1992 and is yet another port of the arcade version. Previously, we tried the Atari 7800 version and gave it a positive review.

The regular Dig Dug version is simply the familiar Dig Dug game people have played already. You have a set of monsters to defeat with your tethered inflation weapon. Assisting you is the ability to dig through the level. You also have rocks found randomly in the dirt that you can use to crush your opponents. The enemies have the ability to simply fly through the dirt from time to time which makes your life much harder. The last enemy will always attempt to flee. Defeat all of the enemies or allow the last enemy to flee to complete the round. You advance through increasingly difficult rounds until you run out of lives so you can post a new hi score.

The unfortunate part is the fact that the original Dig Dug version doesn’t offer anything new and exciting. You can have a brief overview of the level layout, but nothing too original here.

The fortunate part is that this game features an alternate version to extend the gameplay through the “New Dig Dug” mode.

In this mode, there is the same elements found in the original. There are a set of monsters on the level and rocks can be used to your advantage. What’s different in this version is what allows you to progress to the next level. Instead of defeating every enemy on the screen, you need to collect 4 keys to open a door. Once you open the door, you need to get to the door to make it to the next round.

If you defeat an enemy, you do get points, but for enemy you kill, a new one will appear from the top right corner. In addition to the rocks that you can drop on enemies, you also can drop a giant weight that only stops at the first indestructible block. There’s also a giant ball that rolls its way to the bottom Indiana Jones style. Finally, you can drop bombs which will blast away at anything in the surrounding blocks. There’s even new enemies that can only be killed by dropping objects on them. Finally, there’s indestructible blocks which effectively add to the number of obstacles found here.

The good news is that the new game does add to the gameplay. The bad news is that it’s effectively harder. I don’t think the monsters ability to move through anything should have been retained in this version because there are already a number of new obstacles inserted to make the player have a harder time completing stages.

The controls are also a bit finicky in that the main character has to follow along a grid. This means that if you press up, the character has to finish moving along a predetermined path before moving in the new direction. This means you have a limited turn-radius which does not work in your favor. You may find yourself running directly into an enemy even though you intended on moving into another direction. This adds a small amount of seemingly unnecessary frustration to the game.

Generally speaking, I thought it was a good direction to add an additional mode of play. I’m not sure it was enough to make this game worth playing anyway. I was hoping for a greater sense of progress in the game outside of the round number and the flowers at the top. While what is presented in this game may have been greatwhen the Atari systems reined supreme, the game is a bit limited by the standards set by other handheld games at this time such as Mega Man 2 and Super Mario Land 2 – 6 Golden Coins. This game needed to raise the bar on what made the original great, and the developers more or less took a pass on it.

Graphically speaking, the original mode did bring in what was to be expected from previous versions. Unfortunately, nothing was really added. In the “New” Dig Dug mode, it was nice to see different changes in environment as you progressed. The downside is that it’s nothing to get excited over for a handheld game of this time.

The audio in the original mode was a bit of a miss. There’s all of one song and some really basic sound effects. In the “New” mode, it was nice to hear some different tracks. Unfortunately, the sound effects are only moderately better. So, as a result, this game doesn’t quite make the grade as far as audio is concerned.

Overall, I thought a Game Boy release was a great opportunity to build on what was already a great start to a promising franchise. With only moderately improved system capabilities, a transition into more modern gaming systems of the 90s would be easiest. Unfortunately, the developers seemed to just hold back on innovation. They hived off their innovations into a particular mode and only offered a harder version of the original game. As a result, this game ended up being a real missed opportunity. A game to play if you’re curious to see how it transitioned from one system to another and always liked the original Dig Dug, but nothing to get excited over.