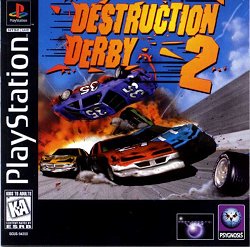 In this review, we check out a vehicle combat racing game called Destruction Derby 2. We find out if this Playstation game is worth trying.

This game was released in 1996. We reviewed the first game in this series on the Playstation last week. The game received merely a slightly above average score. So, we thought we’d try more of the series to see if the second game delivers a better score given that there are gems of interesting ideas in the first game.

A lot of what we saw in the first game is in the second game. The main mode is Wreckin’ Race championship. Also like the first game, you start in division 4 and try to smash your way up to the first division by beating your competitors in your respective division.

In each race, you try to earn race points by causing all kinds of carnage on the race track. Collisions allow you to earn race points that get tacked onto your total throughout the season. A great strategy in earning points is, well, it couldn’t really be determined. I’ve tried reversing into opponents, smashing into spun out or flipped over opponents, spinning opponents around, steering into them, causing a massive pileup in the track, and even blockading narrow portions of the track. The most reliable way of earning points ended up being the whole idea of allowing opponents to smash themselves into you. Even then, there were absolutely no guarantees points were going to be earned. I’ve had races where I found myself in some exceedingly hard collisions and bashed every portion of my car into red life indicators only to end the race with absolutely no points. In other races, I found myself in a few paint scraping collisions and finished the race with a good 75 points. So, what exactly earns points during collisions ultimately eluded me. If you somehow catch up to an opponent with a blown radiator, there’s the remote chance of killing that opponent off for some points, but that’s it.

One intriguing element in this game is the use of pit stops. Part way through the race, one could use their one pit stop to repair significant damage. Just select the damaged portion of the car and mash the gas button to repair. It was crude, but effective.

It was also interesting that there was a push for realism as you could easily find yourself spinning outwith the right collision. The downside is that this almost seems to apply only to you. If you spin a computer opponent out, that will only be a minor setback for that opponent as they almost instantly correct themselves. If you, however, spin out, you’ll slide to a screeching halt, half the time on your hood, and all you can do is watch your rank instantly jump to either dead last or nearly dead last. Oh, and forget about catching up, that only happens if you are lucky and a pileup occurs further up the ranks.

After several seasons of, at best, landing in second, I eventually gave up on this mode out of pure boredom. The only certainty seemed to be that I was going to lose.

At the end of each season is a melee battle with everyone. You simply smash into each other for points until either you or every opponent is smouldering in ruins (almost always the former though).

Additionally, there is a stock racing mode which is basically a Wreckin’ Race, only your goal is to cross the finish line before as many opponents as possible. In this case, you simply earn race points depending on your placement. Again, you are all divided up between divisions, so as long as you top your opponents in your division, you get a chance to move up into the next division in the new season. I only really made it to the 3rd division, but I was able to do some advancement in this game.

There are a few unlockable tracks you can earn as you advance into the next division. Most notably, each division allows you to unlock a new melee track. While I don’t know what half of them are like, the first two are basically a giant circle, so there was nothing too special about the two different arenas outside of maybe what you can see outside of the barriers.

Unlike the first Destruction Derby, you could actually choose a car. The cars you can use are “Rookie”, “Amateur” and “Pro”. While very limited, it was an improvement from 1 to 3 cars between the two games.

Finally, there is a Destruction Derby mode where you can either, like every other mode, play a practice mode, or, uniquely, you can play a Total Destruction mode where every opponent is after you (as if this game wasn’t hard enough).

The damage you can receive is almost an exact transfer from the old game to the new. The damage is separated into 6 quadrants of the car. Side damage doesn’t do a whole lot unless you completely destroy a side. In that case, you could lose a wheel which does affect steering. Rear end damage also doesn’t do a whole lot, but you eventually run the risk of breaking your steering. Front damage is the riskiest damage you can take because if you completely destroy either the left front or the right, you blow your radiator and cause your car to light up in flames.

There is a half decent selection of tracks. This was probably the biggest improvement over the previous game. While there are still barriers on either side of the track, it wasn’t just a thin line all the way through with the odd intersection here and there for the most part. It actually felt like you were driving on a somewhat realistic race track. One gripe I do have is that anything non-pavement seemed like you were driving on both ice and glue. You almost always lose control of your car if you hit a patch of, say, dirt. You also inevitably slow down on these parts to a crawl until you manage to lurch back onto the track again. This was more annoying than anything else for me.

One final note on this game: In non-arena races, the race ends when you either destroy your car or you finish the designated number of laps.

Graphics were decent for a game of its time. The one major highlight was the visuals for damage. You could lose your hood and trunk. Your car actually changes shape as you take damage. What’s more is that the fire your car can have after taking on too much frontal damage was actually well done. Otherwise, I’d say the graphics were half decent.

The audio was a real give and take for me in this game. On the one hand, the music was an improvement over the previous game (not really hard admittedly), but it was only a mild improvement as it still suffered from the same problem every track in the game sounding so similar to each other, it was all an unmemorable blur. For whatever improvement there was in music, it’s all undone by the annoyingly repetitive announcer. Besides his somewhat amusing “go easy on the paint job” and his decent “total destruction!” comment, his lines are almost exclusively a mix of “Ooohh!!!” and “WAHAHAHA!!!” over and over again. Even the first Destruction Derby had more imagination then what I heard in this game and the first one left a bit to be desired. The other sound effects, however hard they were to notice with the announcer muddying them up most of the time, were OK, but nothing special.

Overall, this game was a disappointment to me. There were some interesting innovation attempts with the pit stop and course designs, but it was all overshadowed by the arbitrary point distribution system and overall hugely difficult to work with controls, making this game a typically hard endeavor. The announcer’s extremely repetitive “ooo” and “aah” being sprinkled throughout your race didn’t really help things. It’s impressive that this game manages to make vehicle combat racing boring, but here I am getting bored with it after a while. In the end, this game is disappointingly forgettable.

Furthest point in game: 3rd division in slot car racing. Never made any real progress in the Wreckin’ Race mode.