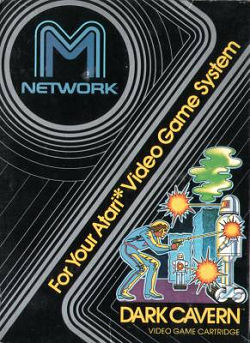 In this review, we stalk our way through the Atari 2600 game Dark Cavern. We find out how well this top down shooter plays.

This game was released in 1982. It was a port from other systems which went by the name Night Stalker.

You start off with 20 bullets and 5 lives. You also start near the center of the maze. The game starts when you walk out of the center area and into the maze.

You can encounter a number of enemies. These enemies include a blog-like creature and a spider-like creature. While these enemies can be a threat, shooting them will yield no points. Instead, the actual objective is to shoot the robot-like enemies.

At the beginning of the game, these robots only appear two at a time. The tricky aspect to taking them down is the fact that they do shoot at you whenever you are directly above, left, right, or below them (regardless of if there is a wall in the way). If you kill a sufficient number of the robots, then they will begin appearing 3 at a time. The numbers will gradually increase until all of your lives have been expired. Each robot kill is worth 1,000 points. Enemies appear through one of two entrances on the sides of the maze.

There are strategies one can employ in taking down the robots. One effective one is to gradually follow them. They can only shoot in the direction that they are moving. This strategy only works for a while because, after a while, they will start randomly changing directions as well. Another strategy is to wait until they are in a particularly long hallway. You can quickly shoot at them and duck out of the way from the return fire. It requires fast reflexes depending on the length of the hall, but it can be effective.

Aiding you are the occasional guns that appear. Each gun you pick up carries and additional 10 bullets. They don’t appear that often, so saving the bullets you have is a requirement. The effect on the gameplay is the fact that you are focusing more on stealth than blasting everything. It adds an element of intimidation to the overall game.

On the good side, this game has a pretty good difficulty curve. It may require a few tries to get used to the general play, but it’s not insultingly difficult at the beginning. The game does escalate in difficulty, so there’s always that threat of death regardless of skill.

Another good thing is the fact that this game does have a more complex maze structure than what was found in Berzerk. The downside is the fact the maze is exactly one screen and you run around the same one throughout the entire game. I would have liked to have seen the maze structure change things up from time to time.

One negative in this game is the fact that enemy robots can return fire even after you kill them. When they are in the process of being destroyed, they are still more than capable of getting off an additional shot at you. This seems to be more of a glitch than anything else.

Generally speaking, this game wasn’t bad. It wasn’t the most complex game I’ve ever played, but it did have a bit of a learning curve to it. The limited bullets did spice things up in the game. The complexity of the maze was a nice thing to see. It also had a decent difficulty curve to it. The downside is the fact that there is only the one screen you get to play with throughout the entire game. The robots can shoot you as they are dying. Still, it was a decent play as far as I’m concerned.

Graphically speaking, this game wasn’t bad. It was nice to see some thought put into the walls, giving them a little bit of variation. The characters themselves were reasonably identifiable as far as I’m concerned. The one thing that I wasn’t a huge fan of was the fact that there wasn’t any sort of special effects like the flashing of colors or even a color pallet swap out on occasion. This does make the game a little bit plain visually. Still, it was fairly decent for a game of its time.

The audio was OK. There was no music to speak of, but the sounds of the robots were not bad. If you kill all the robots on screen, the sound actually stops. One pitfall of the audio was the fact that the pitch goes up for everything the more robots that appear on the screen. So the sound effect for the gun will go up as well. This made for an odd aspect for this game. I would say the audio for this game was generally average.

Overall, this wasn’t a bad game to play. It has a decent maze structure and difficulty curve. The limited bullets really does add to the action in this game. There are some glitches such as the robots firing back even though they got fragged. The audio for everything experiences some odd pitch changing glitches as well. The graphics were half decent. Unfortunately, there is only one maze you deal with and no special effects added. Still, a decent play if you ask me.