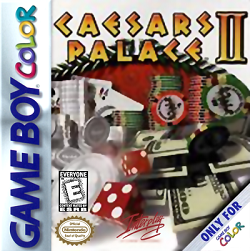 In this review, we place our bets with Caesars Palace II. We find out how this Game Boy Color gambling game plays.

Weirdly enough, in this game, you start by going into the Edit menu. From there, you can name yourself anything you like (unless you like being called “Player1”). After that, you can enter the game.

You start off in reception who has a friendly greeting. After that, you find out that you start off with $2,000. If you run out of money, you can hop over to reception and get a loan of up to $10,000.

After that, you find yourself on the casino floor. You get access to the first set of casino games. On the next floor is probably the same set, but with higher limits.

This game does actually feature a number of gambling games. The first game is Baccarat. This is a curious game where there is a game between the player and the banker. You actually play neither player. Instead, you place your bet on who will win and who will lose. If you place a bet on the player and the player wins, then you get your winnings. If, however, you bet on the banker, and the banker wins, then you get your winnings minus a commission.

Another game is “Big Six”. This game basically has a giant wheel involved. Most of the items are $1 bills. If you place your bet on that, and the wheel lands on the bill, then you get a 1:1 winnings. There are also other dollar bills on the wheel that you can bet on, however, they are gradually more rare. While the likelihood of the wheel landing on the higher bills is less likely, if you bet and win on that dollar bill, payouts are far higher.

Blackjack is also found in this game. It’s a standard game of Blackjack where the house hits on all 16s and stands on all 17s.

Roulette is, once again, a fairly standard casino game found here. Place your bets on various parts of the table and hope you win big on the roulette wheel (or pull your hair out when it lands in the green 0’s for a third straight time, however your luck is).

Keno is another seemingly standard casino game, but there’s two versions here. There’s MultiTicket, which is the standard pick numbers and hope for the best. Additionally, there’s Autoticket. In this version, you can bet on different portions of the board and win accordingly. You can bet on the top half, low half, left side, right side, the outer ring, an area in the center. The more numbers of yours is picked, the bigger you win. After getting about half, you start getting payouts.

Video poker is available in this game. Unfortunately, you don’t actually go against a dealer or anything. Instead, you play to get certain hands. What hands get payouts depends on the game. There’s Jacks or Better, Tens or Better, Deuces Wild, and Jokers Wild.

Poker Challenge is also available here. Now, before you get excited, this isn’t really poker outside of how you win hands. Instead, a set of hands are dealt out. You pick a hand and place your bet on that hand. The house then deals out cards and the best hand wins. Just hope its the one you put money on. There’s Hold’em Challenge which allows you to pick one of three hands. Double Hold’em Challenge allows you to pick out of four hands. The difference here is that you get some mystery cards and the opportunity to double the bet on your hand before all of the cards are revealed. Outside of bizarrely just placing your bet on the winning hand, the game otherwise operates like Texas Hold’em. There’s also Stud Challenge which only remotely resembles 7 card stud. Yes, you get 7 cards and the hands start off with three, but after you bet on a hand, all 7 cards are dealt out and the winning hand is determined. If the hand you bet on wins, you win. Double stud challenge allows you to pick one of four hands. After you bet, each hand has two cards turned over and you have a chance to double your bet if you like. After that, the winning hand is determined and you hope the hand you bet on won.

This game is basically for those who like games of pure chance. With the exception of blackjack and, to some extent, the poker games, all you are really doing is either pressing a button in the hopes of making it big or just randomly picking numbers. For me, slots is really boring because all you are doing is putting money in a machine and pressing a button all the time. It gets boring very quickly whether I am winning or losing. Keno is just picking numbers, and that gets dull after about 5 minutes. Roulette was, at least, unaltered, but I need something to go to after a while before going back to it. Blackjack was quite pure, but I might as well be playing the card game War. Big 6 may be flashy, but nothing to get excited over. The poker games exist in name only. The ones found in this game are nothing like real poker. Poker involves more than one player. The versions in this game are basically poker without the excitement. If I really wanted to, I could pull out a deck of cards myself and produce something more exciting by allowing hands to fold. I can’t really comment on Baccarat because I didn’t quite get what constituted a good hand outside of seeing a “natural 9”.

Also, having played a few gambling games myself, this game doesn’t convince me that having a character that walks around from table to table or game to game adds much to the overall experience. Give me a list to choose from instead.

Graphically speaking, this game was OK. Some of the buttons were hard to read, but the artwork of dollar bills shows that there was, at least, some effort involved here. It was OK.

The music was nothing to get too excited over. It was passable, but hardly memorable. The sound effects, on the other hand, were actually well done. I liked hearing the voice samples found in this game. That was actually one of the only shining spots in this entire game.

Overall, this game may amuse for a half an hour to an hour, but the games get dull after that. Some games were basically picking numbers, but any games that would potentially involve AI were stripped down so that you never really face any opponents. The only dealer you face is in Blackjack and that AI is as simple as it got (hit on all 16s and stand on all 17s). I can appreciate the developers cramming so many games in here, but the games should be entertaining. If you like games of pure chance, then this might be of interest. Otherwise, this game gets rather boring after a while.