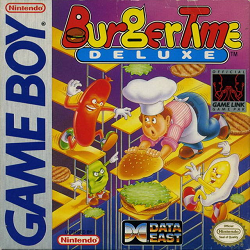 In this review, things get delicious in the Game Boy game Burger Time Deluxe. We find out how well this survival game plays.

This game was released in 1991. We are growing familiar with this series. Previously, we reviewed the Atari 2600 version. That game ended up being very average. We also tried the NES version. That one didn’t do much better either. So, we thought we’d give this game another try on the Game Boy.

There’s actually a bit of a storyline to this version. The owner of Nuten Doughnuts is sending the evil ingredients after the chef of the Burger restaurant.

For those who played the other versions, a lot of the enemies have remains the same. There is the pickle, the sausage, and even the egg that are bent on taking you, the chef, down.

The goal is to push every section of the burgers down onto the plates. Most often, these plates are located at the bottom of the screen, but not always. If you knock down the top item, the items of the burger will cascade down. So, going after the top part first is a very viable strategy.

Another interesting element in these burger items is the fact that you can squash enemies below. this can help you avoid being boxed into a corner.

You have one primary weapon – the pepper shaker. You have 5 uses of this shaker. If you use it on your enemies, any enemy caught in the blast will be temporarily stunned. Useful for getting yourself out of tough situations, though it is ideal to use this sparingly as you only have so much to use.

Randomly, items will appear for you to collect. One of the items that randomly appear is the pepper shaker. This increases your pepper by one unit. A second item you can collect is the chef icon. this chef icon increases the number of lives you have. A third item is the chocolate bar. This allows you to obtain temporary invulnerability. If you touch an enemy, you’ll stun them as if you hit them with the shaker. great for getting those last burger items out of the way. Other items such as coffee will just serve as a point bonus. Often not worth the risk.

One thing this game has going for it is the fact that it improves the formula found in previous versions. The increase in level size and more items really make this game more attractive. Unfortunately, things have changed a lot in the world of gaming. Even by Game Boy standards, this game is somewhat simplistic. So while this game took steps in the right direction, it’s hard to point to this game and say this is a shining example of gaming evolution.

There is some decent gamelay to be had. It certainly has its own charm to say the least. The core formula, after all, isn’t bad at all.

While the short supply of pepper is somewhat offset by the other items, it’s still a notable pitfall of this game. If you got an extra 2 servings of pepper for each level, that might change things, but as of now, it’s only a matter of time before you run out.

Gameplay is also generally short. After an hour or so, you’ll likely have enough of the game. It’s not to say the game is easy, but by the time you reach particularly difficult levels, it’s a little too easy to have your fill.

Generally speaking, this game is somewhat primitive compared to other handheld games released at the time. While the increase in level complexity does help things somewhat, the amount of time it takes to have your fill of this game is pretty short. The pepper system is flawed. The core concept of this game gives a certain charm to this game, but there are better games to be had out there.

Graphically speaking, this game is pretty sufficient. There’s nothing about this game that jumps out at me and says this game is amazing, but the graphics do work.

The audio is a pretty big weakness for this game. While there is a small musical journey at the beginning, once you hit the level music, you get that one track to listen to over and over again. The sound effects are alright, but don’t do enough to make the sound a passable experience.

Overall, this game is a rather primitive one for the time. The core concepts may have its charm, but it is very easy to have your fill of this game in about an hour. The pepper supply is flawed, but the level design is certainly an improvement. The graphics are decent, but the sound is repetitive. Good for a boost in nostalgia, but nothing much more to be had here.