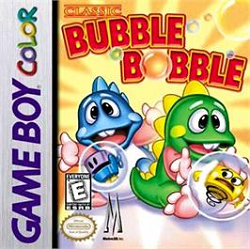 In this review, things get soapy in the Game Boy Color game Bubble Bobble. We find out if this action game is worth a play.

This game was released in 1999. It is a port from the arcade game.

The main objective for this game is to defeat every enemy on the screen. To do so, you need to use “B”. When you tap that button, you’ll shoot out a bubble. If you get an enemy, you can entrap them. After you entrap them, you have to jump on the enemy. Doing so will send the enemy flying. When they land, they’ll drop fruit. Picking up the fruit is optional, but it will add to your score. Defeat all of the enemies in the level and you’ll advance to the next round.

There is a time limit. If you take too long to defeat the enemies on the screen, a chime will sound. When that chime sounds, a skull will appear. Like every other enemy in the game, if the skull touches you, you are dead. The difference is the fact that the skull is invulnerable. At this point, you have to evade the skull while trying to defeat what enemies are left.

If you take too long to stomp on an entrapped enemy, the bubble will appear red. If the enemy escapes, the enemy will be a certain shade of red. Because of this, the enemy will move around faster and be more aggressive. So, it is ideal to defeat enemies as quickly as possible in general.

As you move along in the game, you’ll find certain bonuses. There are letters that sometimes appear. Stomp on them like a normal bubble and you’ll earn what’s inside. In addition, you may see a door appear. This door will warp you a few levels ahead.

In some levels, you’ll see pits. For those of you who played Snow Brothers, the pits behave the same. If you drop down a pit, you’ll wrap around from the bottom to the top and fall from the gaps in the ceiling. This is less noticeable thanks to the smaller screen and the way the game tracks, but the general design has the same basic concept.

One good part about this game is the fact that the basic gameplay is just like other ports made before this one. If you played this game on the NES, for instance, the game is pretty much the same.

One big pitfall this game has is the limited screen space. The game compensates by allowing camera tracking. Unfortunately, not only does the character have to move too close to the edge to move the camera, but there is no warning if you are about to hit an enemy. If the game featured arrows to indicate enemy location, then I would say that this problem is fully compensated for. Unfortunately, you are just left to guess and hope for the best.

Generally speaking, this game has its pros and cons. The pros include the retention of the fast paced gameplay that made earlier iterations so great. The unique style is still intact. The game is also pretty straight forward to understand. The cons include limited screen space. The camera tracking isn’t the greats. Also, it’s hard to tell where enemies are at times because of the limited screen space.

The graphics are pretty good. The characters are nicely detailed. Backgrounds are also nicely drawn. In addition to this,the menu screens are well thought out. I honestly can’t think of much to complain about as far as graphics are concerned, so I’ll say that it is well done.

Overall, while this game retains a lot of what makes earlier versions great, this version has its flaws. This includes the limited screen space, the faulty camera tracking, and enemy locations that are simply left up to guesswork. Still, it is easy to understand. It also has its own unique qualities such as the method of attack. The graphics are great and the audio is well done. Overall, this is a decent enough game.

Overall
Furthest point in game: Stage 8 (yeah, I apparently am not good at this particular game. I admit that.)