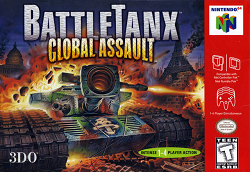 In this review, we get ready to level things in the N64 game Battletanx – Global Assault. We find out how well this action game plays.

This game was released in 1999. It is the sequel to the game Battletanx which earned a huge score here. We also played the Game Boy Color version of Battletanx and found that to be a pretty solid game. It only makes sense that we give this game a try.

Griffin Spade and his family has settled in San Francisco and began rebuilding after the events that happened in the prequel. In January of 2006 (heh), San Francisco is attacked by unknown forces. While Spade and his army are able to fend off the attack, Cassandra uses an unknown power to turn Spade’s forces against him. Left with no choice, Spade and his family flee town. From there, they begin a fact-finding mission on what these new powers are and how to stop Cassandra and her army.

A lot has been improved upon from the previous game. While a lot of the tanks have made a return to this game (such as the Goliath tank, the classic M1 tank, and the small machine gun tank), plenty of new tanks have made a debut here. There’s a flamethrower tank, a hover tank that can drive over mines, and even the annihilator class tank. That tank is a sort of souped up super Goliath tank that can teleport and has two automatic machine guns.

An intriguing change is the fact that the free lives system has been removed. Instead of lives, players operate with a sort of “tank bucks” system. As you earn more tank bucks, you are able to afford different kinds of tanks. If you want to stick with the classic M1 tank, you are certainly able to use it. If you want to tank control of a Goliath tank, that’s certainly an option on most levels, but you need to prepare to pay for it. This allows sensible variety throughout the levels. This is certainly an improvement over the previous free lives system where you are largely stuck with the M1 tank.

A lot of the weapons from the previous game have made a return here. This includes the stars left behind by enemy tanks, health boxes, swarmers, grenades, homing missiles and even the nukes. There’s a few new weapons in this game such as the nitro boost, electrical bolts, and teleportation. By and large, this pretty much represents an upgrade over the previous game, that’s for sure.

Another improvement this game makes is the missions themselves. The previous game seems largely tied down by the Queenlord missions. This is ultimately a sort of capture the flag system. While these missions do make an appearance in this game as well, it’s largely a tribute to the previous game more than anything else. A number of new kind of missions make a debut in this game. This includes missions that target a specific building. Another mission is an item collecting mission (both people and disks it seems). Probably the most innovative, if annoying, mission is the protect the convoy mission. While playing this mission, I couldn’t help but think this is not too dissimilar to the missile carrier levels from Blast Corps. The objective is to allow an auto-moving convoy to cross a level filled with enemies, mines, and other hindrances.

In addition to these improvements is the control style. In the previous game, the cannon on the tank is simply fixed in position. In this game, turning moves the cannon left and right. Essentially, the tank treads follow the orientation of the cannon while moving forward. This allows players to simply position the cannon in the direction of the enemy and fire. It allows for much more freedom of movement.

While this game does improve on a lot over the previous game, there is one thing this game simply couldn’t get away from: length. Like the previous game, you could spend a single day and go through the entire game without too much of a problem. You have a dozen or so missions and half of them require maybe 5 minutes to complete. A few missions do take 15 minutes to a half an hour, but you are still looking at a single day completion here. While the saving system does allow for a lot of breathing room, it was seemingly set up with a much larger game in mind. I would have liked to see more levels or much larger missions here. If it took two or more days to complete this game, I would have been satisfied with the length.

Another way this game simply couldn’t improve on is the storyline. While the prequel has a fairly weak storyline, this game doesn’t get much better. Granted, there is effort to try and tie up loose ends from the previous game. It does do a pretty good job at explaining the cause of the plague after all. Unfortunately, the writing for this game remains very weak otherwise. The only plus here is the fact that the storyline throughout is very skippable. Another annoyance is that the game leaves on a cliffhanger. As history seems to prove, no third game in the series was ever made.

Generally speaking, although this game has its flaws (such as weak writing an short length), there is plenty of improvements to be had. There is an increase in the variety of missions, new tanks, an improved tank lives system, improved controls, and new weapon pickups. A lot ways props can be given to this game to say the least.

A major weakness the previous game had was graphics. Some of the pictures were almost previous console generation quality. The menu graphics have been improved in this game. It’s not terrible looking. In fact, the main menu graphics look pretty well done as a matter of fact. The in-game graphics are improved over the previous game, though some of it is falling behind other games by this point. It would have been nice to see better lighting effects outside of the yellow flash in windows as you hit buildings. The special effects are OK, but nothing huge. So, good quality, but nothing amazing.

Audio is where this game took a step back. The music in the previous game was very well done. In this game, the music is by and large average. Nothing to get excited over. The best track in the game is probably the Texas Slave Fortress and maybe the Truck Stop level. Other then that, the music can be a bit repetitive.

Overall, this game is a great game to play. It took the previous game and successfully improved on the formula in many ways. Improvements include the tank bucks system, weapon pickup system, tank design, controls, and missions. It is unfortunate that the writing for the plot remains weak and the length remains disappointingly short. The graphics are an improvement, but struggle to keep up with the pace game development has set. The audio is probably the biggest setback, going from impressive to average. Overall, a game totally worth playing.