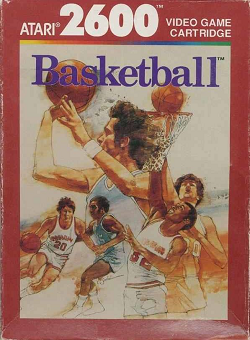 In this review, we hit the court with Basketball. We find out if this Atari 2600 is worth a shot.

Basketball was released in 1978.

All this game is is one on one basketball against either a human player or an opponent player. The player with the most points before time it up is the winner.

the game starts with the ball being thrown up into the air. After that, the player that has been scored on gains possession of the ball in their defensive zone. Interestingly enough, every basket is worth 2 points. There are no three pointers and no fouls as well.

Personally, the one good thing going for this game is that it is possible to play against a computer opponent. Unfortunately, the AI can be touch and go at times as sometimes, the computer player will try and run to the other court and run around on the edge while you run to the other side and score an easy two points.

The bad part about this game is that stealing a ball is kind of glitchy. Sometimes, the game doesn’t detect that you have stolen the ball. Other times, you can steal the ball, but it detects your opponents proximity near you. So, as a result, the ball gets stolen back and forth instantly and you hope you have the ball after you run the other direction. It’s simply a coin toss if you are successful or not which is annoying.

The audio wasn’t exactly spectacular. There’s only two sound effects – the bouncing ball and a bleep to indicate if you scored a basket or not. Nothing really much to go on there.

Overall, this game was a bit of a miss for me. There is some action going on in this game, but the novelty wears off quick. Some elements are a bit buggy and the AI for your opponent can be a little strange too. The graphics were basic, but nothing to really write home about. The audio was pretty much the same thing. I would say if you are going to try an older game in this era, this is probably best passed over.