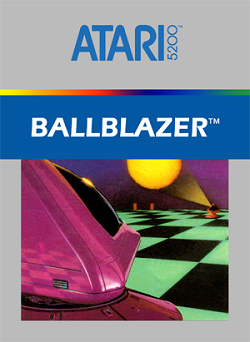 In this review, we check out a sport action game called Ballblazer. This game was released on the Atari 5200. We find out if this game is worth checking out.

This game was released in 1984. It’s a first person perspective split screen sports game that pits two human players against each other.

Essentially, players assume the roll of a triangle-like space craft. There’s a time limit for each match. When the game starts, a ball is fired onto the course. Players can grab the ball, steal the ball, or score a point by getting the ball to the opponents side of the course and getting the ball between two moving goal posts. The match ends when 8 goals total are made or when the timer runs out.

It was a little hard for me to assess this game as I didn’t have anyone to really play this with the day I played this game. Still, I was able to get a good idea of what the game would be like with two players.

Graphically, I’m actually quite stunned that this is an Atari 5200 game. You’d think a game like this might come out in the mid 90s at the latest because not only is this a first person perspective game, but it’s also a very smooth two player split screen first person perspective game. The different players might be blocky and the goal posts might be nothing more than flashing rectangles, but the game is otherwise impressive in the graphics department.

To add to this, there’s music embedded in this game throughout. Not only that, but there’s plenty of sound effects ot go around with what can happen in this game.

The only caveat I see in this game is that it could get repetitive after a while. There’s nothing really showing any signs of progression other than the arrows in the middle point out who scored. There’s no change in color scheme or anything to indicate who was winning. Still, this stands to be a very interesting game to play between two players.