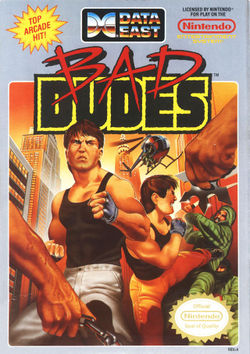 Bad Dudes is a fighting action game that features two muscle-bound “dudes” fighting through hoards of evil ninjas to rescue the President of the United States. We take check this game out and see if the game is as awesome as the premise.

This particular port was released in 1989. Originally, it was an arcade game released in 1988 and was already being ported to other systems at the time.

The basic premise of this is pretty much explained briefly, yet very effectively after the player selects which protagonist to use in their mission. A secret service agent tells the player that the president has been kidnapped by ninja’s and asks if the player is bad enough to rescue the president. That really put not only the storyline into focus, but also sets the tone of the entire game as well.

This was really a very testosterone fuelled game that was produced when it was thrilling to say “F___ yeah, America!” and was more of an inspiring enthusiasm thing as opposed to today where the film Idiocracy pretty much single-handedly transformed this into merely a sign of general testosterone fuelled stupidity.

The player starts off, presumably, on the streets of Washington where hoards of ninja’s are trying to stop your progress of tracking down the president. Blue ninja’s are simply the weakest of all the enemies, but are the most numerous. One hit from your fists or your feet knocks them out. Of course, when your arms and legs are as wide as the common torso, that would probably be expected under normal circumstances. Along with them are grey ninjas that can either throw shurikens at you or lay a set of four tacks on the ground that can damage you. It takes two hits to defeat them. Red ninja’s are armed with a knife and take three hits to take down. There are female ninja’s of different colours that try and attack you as well, but take one or two hits to take down. There is also the bandana wearing ninja armed with a sword that jumps up and stabs downward onto you. This ninja takes about two hits to take down. At the end of each level is a boss that has it’s own health meter. If you defeat the boss, your character will raise its arms and a highly compressed audio sample of someone saying “I’m bad!” is heard to signify the completion of the level. The player can gain a level for completing a level and recover all health when starting the next level.

Two level’s (level 2 and level 4) are auto scrolling levels. On level 2, you are on top of a tractor trailer that, interestingly enough, has the word “dudes” on the side of the cab. Apparently, these guys have their own trucking business when they aren’t kicking butt and rescuing world leaders. Why not?

Along the way, the player can obtain pickups that help along the way. Many of these items are dropped by the red ninja’s. One of the most useful items is the energy drink that restores a portion of health. considering how difficult this game is, you’ll learn to almost drool at the sight of a health booster like this. There are two weapons in this game that the player can pick up as well. These are the combat knife and the nun-chucks. The knife is quite short, but can increase damage per hit. Useful when you get into later levels and are faced with multiple multi-hit enemies. The nun-chucks also increases your characters power, but has the added bonus of having an increase in range. This is useful because judging the distance from you and the enemy can be kind of annoying. Sometimes you take damage because you manage to be slightly too close to your enemy as you take them out. This weapon can also be really useful for bosses as well. One thing to note is that if you die, you lose your weapon and you can only carry one weapon at a time. The last item you can collect is the clock. Collecting these items increases your time limit. I have to admit, I never had an issue of time running out while playing this game, so I’m not entirely sure how useful this item is in the first place.

One feature of this game is the two tier system. This system is infrequently present throughout the game. Essentially, you can jump from the upper part of the level to the lower level and vise-versa. While this feature isn’t all that noticeably useful at first, this is can end up being a really useful feature when a one floor starts getting overly crowded with enemies. Just skip down or up and you instantly have nice open space to start picking off enemies as they try to pursue you. I found this system extremely useful when challenging the first boss. I usually hit the boss, then, before he breathes fire on you, just hop from one floor to the other and, with a little luck, good timing, and strategic character placement (the enemy get’s knocked back a little to the point of disappearing off the side of the screen after all), you can beat the boss without taking any damage at all.

As you progress, the enemies get more varied and the bosses get harder. Some enemies are seemingly midgets that require ducking and punching just to deal damage. Early level bosses also start becoming regular enemies with different colours and (seemingly and mercifully) less health which can allow you to defeat them a little more quickly.

One thing I found, like a lot of other people who have played this game, is the general difficulty of this game. I found that even with good timing and strategic paths throughout the levels, this game is still quite hard. As I found out, this game only has six levels total. Without any cheat codes, I don’t think I’d ever see the ending (which features the president thanking you and offering to eat burger’s, as it turns out). After I found out that there was only six levels total, I felt a little better having made it to the fourth level boss. While it was difficult, I found it possible to still enjoy this game which is, I find, a difficult thing to have in a game.

Graphically, I thought this was pretty decent for a game made before 1990. Numerous games are seemingly quite crude, but this game’s crudeness is actually a little limited. The only thing I did find about the graphics was the fact that enemies tended to start flickering whenever there was a certain number of them on there. Then again, I think this was a hardware limitation of the regular Nintendo which only allowed a limited number of characters on screen to begin with. I’ve heard that a way of bi-passing this is to have one disappear for a frame and let another enemy appear, then switch back and forth really quickly so as to permit more characters on screen than the hardware allowed. So, this seems to not necessarily be the fault of the game itself, just hardware limitations of the time.

The audio was pretty good as well. The music was particularly enjoyable on level 2. I’ve heard people think it’s merely a rip-off of Bloody Tears from Castlevania, but I’ve heard both songs and, while they sound similar, they are different songs. Sound effects are quite basic, but creative. Most impressive about it, though, was the fact that a speech sample was used. Pretty impressive for an old NES game. Very few NES games ever managed to incorporate speech samples. It’s a bit distorted and somewhat grating by today’s standards, but back then, really impressive. I can only think of a Ghost Busters Game and Skate or Die 2 that also incorporated speech samples off the top of my head, so that shows just how difficult it was to incorporate such things in a game on a platform that literally has thousands of games on it.

Overall, this game is an interesting way to kill a few hours. If you want a beat-em-up game that will challenge you, you could do a whole lot worse than playing Bad Dudes. Despite the difficulty, you can get some enjoyment out of this and get a good feel for what hardcore retro gaming was like.

Furthest point in game: Died a couple times fighting the fourth level boss. Never defeated him without any cheat codes.