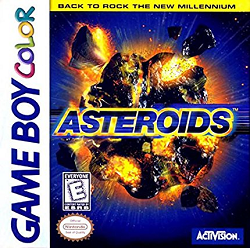 In this review, we break up some rocks in the Game Boy Color game Asteroids. We find out how well this top down shooter game plays.

Since we’ve already reviewed the Game Boy version, we decided to focus this review on the differences found in this game.

One big change is the fact that this game has a storyline. This storyline progresses between certain levels. Essentially, you are part of a space company. The purpose of this company is to send you in your spacecraft to different quadrants to clear out asteroid and other debris. Different quadrants have different story elements thrown in, but the missions goals are generally the same.

While normal asteroids break apart in the same manner as other games, this game features a whole new variety of asteroids. These asteroids include crystal asteroids (regrows after a while), explosive asteroids (looks somewhat different than the normal asteroids, but has a massive blast radius that eliminates the different stages of asteroid breakage), and ancient energy asteroids (absorbs your shots and then fires it straight back at you. Contains a small window where you can destroy them without worry).

While you do have your standard weapon, you also have a secondary firing mechanism through the “B” button. Use this button if you wish to use a special weapon. What that special weapon is depend on the level. You can collect these weapons that randomly float past you.

Special weapons include ram shields (destroys anything in the near vicinity of your ship), Armageddon (massive blast radius that destroys anything around you caught in it), guided missile (goes up to a nearby threat and damages/destroys it), and mine (shoots a mine that detonates on anything on contact). The thing to note is that if you complete a level without using a special weapon, you’ll be awarded 2,000 points.

There are a few other items you can pick up. This includes an extra ship, 2,000 points, 5,000 points, and an extra defense (increases defense by one charge). These items can appear at any time.

What is also notable is the fact that you get a free life for every 20,000 points you earn in this game. So, racking up points becomes crucial in your mission.

Additionally, the down function has been modified. Previously, it warps your ship randomly on the level in case of an emergency. In this game, you have a limited number of “defenses”. If you press down, your ship will instantly reverse direction. It is up to you to use thrusters with up to get away fro whatever danger you are trying to evade.

While enemy ships are nothing new, there are a few new ships of note. One ship of note carries a new smaller asteroid into the field. It will continually fly around until you destroy it. When you do, the asteroid will be freed so you can destroy that asteroid too. Another enemy ship appears along the edge and stops. It then charges up and then burst forward in a collision course with you. Finally, there are freighter-like ships that just randomly fly around. There are others, but those are just some of the examples of new ships that have been added.

In total, there are 15 levels for each zone. Complete 15 levels and you advance to the next zone. While zone 1 has nothing remarkable about it, each zone after has its own additional surprise to mix up gameplay. Zone 2, for instance, has a black hole in the middle that tries to suck your ship in. Zone 3 has random explosions on the screen (some of which shoot at you). Zone 4 have random life forms that fly through the area, potentially killing you in the process. What’s in this game after, I’m not sure because I never made it that far after.

An improvement is the fact that the game grants temporary invulnerability for a second or so after you spawn. This allows you to get out of the way of any dangers you happen to appear on. So, elements of necessary raw luck are fully removed from the game.

One final change of note is the fact that the game gives you a choice in ships. There are three ships to choose from. While the ships have their own look to them, they all operate exactly the same. So, it’s all about aesthetics, really.

We’ve played a lot of remade games over the years here. Some games that are remade have a lot added to it which makes it a great game all over again. Other remade games focus in staying the same even though so much has changed in the industry. The former has a habit of doing well while the latter typically ends up being simply outdated. It’s great to see this game fall into the former category.

A lot of the new content found in this game is fantastic to see. This game manages to take a game that would be, by the standards of 1999, a flat and boring game and adds a lot of depth to it. While the basics remain the same, there is so much additional user interactivity. This helps make this game remain relevant to new gamers while at least giving a nod to where this game came from. I think this game struck a very good balance here.

The difficulty curve is pretty decent. The addition of the new asteroids could have been more evenly pushed onto the player instead of having a large portion of them put on the player right away, but the way it is now isn’t all that bad either. The earlier levels are fairly straight forward while the later levels prove to be quite challenging. The only time things are a problem is with zone 2 which seems to be much more difficult than zone 3 in my view. Still, things seem to balance out later on after this.

My problem with this game is that the special weapon systems seems a bit archaic. After the end of each level, all the weapons you collect are basically reset back to zero. I don’t understand why this is a necessary element in the gameplay. I would say that there should have been an inventory system that allows for minor forms of stockpiling.

Still, the learning curve is pretty good. It doesn’t take much to figure out the information gaps in the game and a lot of the dangers are explained in the briefing notes anyway.

Generally speaking, this is one of the better examples of taking an older game and bringing it in to a newer audience. This game adds a lot of features that beefs up what would otherwise be a fairly flat game for the time. While the inventory system constantly resets everything to zero, I found this game to be an otherwise decent game.

Graphically speaking, this game is pretty well done. The backgrounds add a lot to the visual eye candy. The ship selection is also nicely done. My problems are within the menu system. It can be difficult to tell from time to time which item you select (namely the continue question). In addition, the briefing messages are a little stark even though the choice of font is pretty good. It’s fairly decent overall.

The audio is OK. The gradually changing music is a nice touch. Unfortunately, there isn’t a whole lot about it that’s memorable still. The sound effects are alright, but nothing huge. A passable experience as far as I’m concerned.

Overall, this is one of the better examples of old classics returning to a newer audience. This game adds a lot of interesting features that just didn’t exist previously. While I have a beef with the inventory reset between levels, there isn’t a whole lot to complain about in the game. The graphics are OK, but the menu selection can be difficult to read and the briefings are pretty stark. The audio is OK. Passable, but nothing special. An pretty decent game.