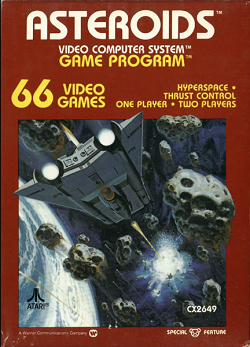 In this review, we check out a port to one of the most classic games of the early 80’s, Asteroids. We bust some rock to find out if this top down shooter game is worth the re-play after all of these years.

This port was released in 1981 and would continue the success that is Asteroids. Like pretty much every Asteroids game and their clones, the objective is to destroy every asteroid on the screen to advance to the next stage.

In this game, you have a score and a counter for how many lives you have left. If you hit one of the asteroids, your ship blows up and you lose a life. For every 5000 points you earn, you gain a free life. It isn’t too difficult to obtain 5000 points as large asteroids are worth 20 points per hit. 50 points is earned for every medium asteroid you shoot. For the small, hard to get asteroids, you earn a nice tidy 100 points each.

What’s interesting about this game is that the asteroids are always on either side of the screen while you simply start in the middle. The asteroids also generally all follow a vertical path along the screen as well. This makes it even easier and gives you all the more reason to stay in the middle and pick off each asteroid one at a time.

Another thing to note is the fact that you are limited to two shots on the screen at a time. If you shoot an asteroid up close, then you get that shot replenished extremely quickly. If you miss and your shot goes off of the screen, then it takes longer for your ship to reload that shot. Pressing down on your controller will warp the ship to another location, though I never really found many times where I needed to do so.

While free lives are easy to obtain in this game, it can also be easy to lose a bunch of them all at once. This is if the asteroids are cluttering the middle of the screen. So, being cocky isn’t advised in this game if you want to go for a higher score. If you earn a free life, the system will beep at yout to let you know you’ve earned a free life. If you are like me, then you’ll have eventually won 9 free lives. That’s the cap in this game. If you have 9 lives and you earn another 5000 points, then you will be awarded nothing at all.

The score is also capped at a maximum of 99,980 points. This is because if you earn more, the scroll will roll over to zero again, causing you to start over. I found this element to be a bit disappointing in this game, but I know there’s nothing I can really do about it besides congratulating myself in breaking the game because I did particularly well.

Graphically, I thought it was interesting that the asteroids are all different colors – even if the colors are a bit pale. The graphics, still, are a bit crude as the machine struggles to draw your ship at all angles. Given the limitations of this game in the graphics department, I think I can let this one slide. Overall, I felt that the graphics were decent.

There was no music, but there was some basic sound effects. There’s the explosions, the shots, and the beeping noise that informs you that you won a free life. I’d say, for a simple game like this, I can say that this is kind of sufficient.

Overall, this game may be a bit too easy for some gamers, but there is still enjoyment that can be had in this game. This game is certainly worth a try when you go to review games made from long ago.

Furthest point in game: Earned 9 free lives and got an additional 5000 points. Also rolled over the score. After that, called it quits.