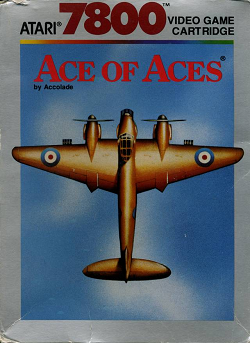 In this review, things take flight in the Atari 7800 game Ace of Aces. We find out how well this flight simulator game plays.

This game was released in 1988 and is one of many versions floating around.

In this game, you select a mission. You basically select your opponents. Whether they are bombers, fighters, or whatever, you basically take control of the type of opponent you take on. Weather and number of enemies are then determined for you.

Upon taking control of the plane, things seem pretty straight forward at first. Up and down is reversed as you would expect in a flight simulator. One button first while the other one allows you to see your score card so far. You have a compass and a very basic radar.

It is only once you get into combat that things start getting surprisingly complicated. Sometimes, while firing and moving the plane in a different direction, you’ll accidentally trigger a different view. These views include a map view, left wind view, right wing view, and your weapons bay. The hard part is apparently switching between the views as selecting them at will is no easy task.

Some of these views will show a selector and a particular option you can exercise. Where things get messy is the fact that flipping the switches will also require fire+up/down or fire+left/right. Whether you trigger a different view in the process or successfully hit that button is really up in the air. Most of the time, executing those moves actually do nothing. So, constantly fighting the controls and hoping for the right outcome is all you can hope for.

What makes things even more messy is the fact that flight controls are disabled when in these other views. If you happen to nudge the plane left, right, up, or down before the move is done successfully, chances are, the plane will start to dive in some form or another. This means you have to scramble back to the front view after fumbling through the controls just to regain control of the plan. The plan continues flying in all of these views.

Once you have figured all of this out and manage to get back to the front view, you’ll hope the plane isn’t on fire. All this time, you are basically taking damage from enemy fire. You can return fire and eventually down a few planes. Once your ammo is done, I didn’t really figure out what I could do after other than just eventually take on enough damage before crashing.

In the event you happen to run into a storm, the screen will start flashing. Going through storms can do damage – specifically mess up your radar and compass. Without these, you are pretty much flying blind.

You can get points depending on what you shoot down. A bomber is worth 400 points while another fighter is worth 500 points. What anything else is worth, I have no idea.

Generally speaking, while the dog fighting is actually not that bad, this game shows that one bad thing can spoil an entire game. The controls are particularly bad for this game. What likely should have happened is that the alternate button and a move should have been able to switch views. This likely would have saves a lot of headaches in the game. The fact that one whole button is responsible for just showing you a score suggests that the controls were not thought through at all. This is because there are so many different controls tied to the only other available button. While the weather is interesting and fighting enemies does provide mild entertainment, the controls pretty much overshadow everything.

The graphics did little to improve the quality of the game. Even if you hit the ground, you’ll always be above the clouds. So, all you see are clouds, sky, and enemy planes. Whats worse is the fact that the frame rate is almost reduced to slideshow quality. I’ve already played a number of Atari 7800 games and this has one of the slowest frame rates I’ve ever seen. What’s more is that something in the HUD telling me where I should go or where I should go to re-load would have been excellent (if landing is possible in this game in the first place). So, the graphics are pretty bad in this game.

There really wasn’t much for music, but the sound was actually pretty good. You can tell if the plane is losing altitude and even hear enemy fire. The sound effects can help, but that’s all you get.

Overall, this game was, at first, a pretty interesting game. The dogfighting wasn’t that bad. Unfortunately, the controls pretty much ruined everything with the random taking of different views and random working, well, at all. It was, at times, hard to tell what you needed to do. The weather change to storm was OK though. The graphics were pretty sub-par and the sound effects were somewhat useful, but that’s all you get from the sound department. A sub-par average game.