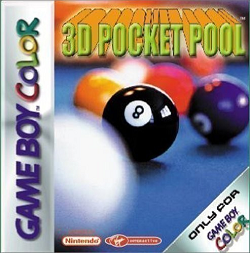 In this review, we rack ’em up in the pool game 3D Pocket Pool. We find out if this game boy color game is worth playing.

In this game, you pick one of a number of characters that are featured in this game to play either a single game or a tournament.

The defining feature of this game is that this really is a 3D representation of pool. While that may sound exciting at first, there were a whole bunch of drawbacks to this.

The one drawback is the physics. While it isn’t the worlds easiest thing to get right – especially when it comes to the game pool, the whole game revolves around pool. To highlight how back the physics are in this game, just think of how uncooperative the physics were on the pool table in Duke Nukem 3D. While this was supposed to be a small Easter egg in that game, it was as if the developers took the physics from that game and put it into this game. It’s possible to hit a ball on the side and have it angle back towards you without it hitting anything else. The edges of the pockets are buggy to the point where, visually, the ball should go in, but the game detects the ball as still hitting the corner of the pocket. Getting the physics in pool wrong is a fair bit like getting the handling wrong in a racing game. It just becomes a sticking point in every aspect of the game.

A good part about this game is that the game allows you to visualize where a ball is going after you hit it with the cue. As an added bonus, you can also see where the ball you hit goes. After that, you are on your own. While that sounds like a fantastic thing, there are limitations. The camera is probably the biggest one. If you find yourself trying to do a sharp angle, you can’t really see where the ball is going. This leaves you in the position of guessing and hoping for the best.

As a result, the AI in this game has all the advantages. For the most part, the AI opponents can see every angle. The AI is also quite tough. To make matters worse, the time limit does not even apply to the AI opponents. So, you already have a disadvantage going into this game. The AI may not be perfect as they occasionally miss, that’s typically the result of you pulling a safety shot. Otherwise, you run the risk of having them run the table on you.

In addition to this, there is no ability to put English into play. Everything is a straight shot and the only thing you can control is the angle and the power.

So, while there is a novelty to be had with the game having an actual 3D pool table to play with, it doesn’t look like the hardware was really ready for it. Either that, or the developers were not up to the challenge. The pool table is buggy, the opponents have numerous advantages over you, and the camera can be difficult to control.

Graphically, this game has positives and negatives. The negatives are around the gameplay itself. Sometimes, parts of the balls won’t get drawn in when there are a number of them on the table. On a positive note, however, the character designs were pretty decent. The cut-scenes were OK as well whenever you win (there is nothing for when you lose, it just cuts back to the intro screen. So, while it was OK in the cutscenes, it wasn’t that great where it counted – during play.

The audio was very hit and miss. The sound effects are quite authentic. Unfortunately, the music left quite a lot to be desired. It was little more than buzzing, hi-hats, and the occasional train whistle. While it does change if you win in a tournament match, the music just doesn’t seem to get any better.

Overall, while I can appreciate the attempt to bring 3D into the handheld environment so early on, this game just doesn’t really cut it. The physics were bad, the cameras left a lot to be desired, the opponents have plenty of advantages, and there were plenty of bugs to be had during gameplay that messes with the most basic elements of gameplay. The graphics didn’t cut it during play, though the character designs and cutscenes were OK. There was hardly any music to be had here, but the sound effects were decently done. Overall, I’d recommend passing over this one – especially since there are Game boy Advance games to be had at this point in time.

Overall
Furthest point in game: Second round in tournament. Score was 2-1 with only two balls of mine left on the table.