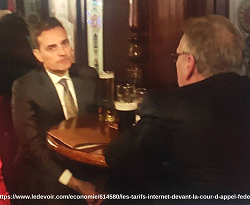 A photo of CRTC chair, Ian Scott, meeting with a Bell executive over beers is sparking controversy. This because the photo was taken just before a favourable decision.

In late May, we reported on a CRTC decision to overturn the 2019 rate cap decision. The decision effectively caps wholesale rates for independently run ISPs. This was after a complaint that wholesale rates were artificially inflated and potentially driving those smaller ISPs out of business. As most are pointing out, by eliminating this cap, cell phone and Internet rates are destined to go up. once the decision was rendered, Tek Savvy announced that they would be pulling out of the cell phone market entirely because prices would be far too high. Further, Teksavvy called for Ian Scott to be fired. This as Open Media blasted the decision “the most anti-customer decision” the executive director has ever seen. The federal NDP joined in on the condemnation, pointing out that consumers are going to pay for this decision.

The photo has sparked further accusations of regulatory capture. In response, digital rights organization, Open Media, has launched a campaign to have everyone invite Scott to a beer in an effort to have consumers voices heard:

The CRTC wants to conduct regulatory business at the bar — so be it. But the days of having a beer with just one side of the debate are over.

News broke recently that CRTC Chair Ian Scott is not just uncomfortably cozy with Big Telecom lobbyists — he even held a 1:1 lobbying meeting with the CEO of Bell over beers at an Ottawa pub!

This was only days after Bell filed its appeal about the CRTC’s decision to lower Internet wholesale rates, which would have led to more affordable Internet across Canada. And guess what? Bell got their way!

It’s unfair and ridiculous — but if heading to the pub is the only way to get our voices heard at the CRTC, then we’re game.

Here’s our proposal for Chair Scott: Meet us and a handful of OpenMedia community members for a beer, and hear directly from the folks he’s been screwing over with the CRTC’s recent decisions. Seem more than fair to you? Send the invitation to CRTC Chair Ian Scott right now: Will he meet OpenMedia and 3 members of our community for regulatory beers on the patio?

Already, Canadians are already fuming that they pay among the highest cell phone rates in the world. With prices already seemingly destined to go higher – especially with some carriers effectively admitting that they have been prices out of the market, many are already pointing to a lack of competition as part of the problem. This latest decision makes it look like a bad situation is destined to get worse. It is especially disappointing that this is happening given that many parties, during the last election, were promising to lower rates or increase competition to help solve this longstanding problem. Between this and the Rogers Shaw deal, it appears that the exact opposite has occurred throughout this government. So, Canadians are just going to continue to pay the price for all of this.