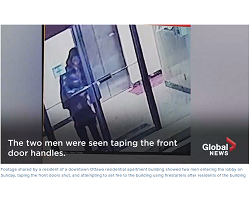 There was an apparent attempted mass murder in Ottawa allegedly in retaliation to a noise complaint.

Earlier, we reported on American Republican’s and right wing extremists openly admitting that they have been funding the so-called “Freedom Convoy”. In the process, they effectively outed themselves as engaging in a massive foreign interference campaign.

Now, we are learning of some disturbing developments in Ottawa. This is not our typical coverage, but given the extraordinary developments, we felt the need to try and push out awareness for what happened on the off chance either of the two perpetrators are recognized.

Last night, Freezenet became aware of social media posts related to what appears to be attempted mass murder. What we know is that someone or a group of individuals in a residential apartment complained about the constant honking of horns at all hours. Some time later, two people came to an apartment building, taped the doors shut and attempted to light the whole building on fire at around 5AM, potentially causing a mass casualty event. The incident appeared in a Twitter thread with screenshots of security camera footage documenting everything that happened:

I've been hesitating to post this publicly, but I feel I must for the safety of downtown Ottawa residents. Here are the facts:

Last night two arsonists brought a full package of firestarter bricks into our building's lobby at 5AM. The building is located at Metcalfe & Lisgar. 1/

In response, trucker convoy supporters started threatening the user, accusing him of being part of a false flag operation, and trying to dismiss the whole thing as a hoax. This despite the evidence that was presented.

One of the ways the convoy supporters attacked the user was by saying that being hesitant to publish this is evidence that the story was made up. The problem with that attack is that it is well documented that police have been effectively siding with the convoy occupiers for some time. This was through video footage of fist bumps with police and posing for photo’s with the demonstrators. Furthermore, residents have been fearful for their personal safety for nearly two weeks now, so the hesitation actually matches what is seen on the ground. Many users have documented noise levels exceeding 100db in the dead of night and the idea that they feel intimidated makes sense.

Another attack the protesters levied against the user is that no police complaint was made. This ignores the user saying very clearly that authorities were, in fact, contacted right in the Twitter thread. So, that was a lie on the protesters part.

A third way that the user was attacked is suggesting that a building tenant passed by as they were lighting the fire. This misrepresented the timeline as the story actually said that the tenant walked by before the fire was started. So, it was an effort to mislead people.

Finally, we noted that convoy supporters are saying that major media outlets aren’t touching this because the story is clearly fake. That, too, is untrue. Global News published a story on this:

Ottawa Mayor Jim Watson says the city’s police arson unit is investigating after “disturbing” reports of unidentified individuals attempting to start a fire in the lobby of a residential apartment located near the site of ongoing trucker convoy demonstration.

“Thankfully, no one was hurt, but this story could’ve ended very, very differently,” said Watson at a meeting of city councillors on Monday, calling the incident an act of “obvious criminal intent.”

“Show human decency and leave our community now that you’ve made your point.”

Police have not yet said who they believe is responsible for the alleged attempted arson but are urging members of the public to help identify two individuals who are described as “persons of interest.”

The Ottawa Citizen also published a story on this:

Police are investigating what appears to be an attempt to start a fire in the lobby of a downtown Ottawa apartment building, where tenants say they have been besieged by anti-vaccine mandate protesters raging in the national capital for more than a week.

Ottawa Police on Monday released security camera footage from the lobby of the Lisgar Street apartment building as it sought out the public’s help identifying suspects in the Feb. 6 blaze. Police say it’s believed “that one or more persons entered the building and started a fire using undisclosed materials.”

No injuries were reported and the fire caused only “minor damage,” police said.

Matias Munoz said that when he came downstairs Sunday morning, he saw the carpet and floor were charred, and that there were blackened fire-starter bricks strewn across the lobby.

The building manager showed him surveillance video, which he said appears to show two men light a package of the bricks in the lobby and secure the front door handles together before leaving through the side door around 5 a.m. Sunday.

The video also shows a different man enter the building and put the fire out a short while later, he said in an interview.

There are more than 100 units in the building, he said, and added that he can only imagine what would have happened if the fire had caught the wood panel walls nearby.

Ottawa police are urging people to contact them if they could identify the two perpetrators. This tweet was posted:

The incident occurred in the early morning hours of Feb. 6 at a building in the 200 block of Lisgar St. @CrimeStoppersOT https://t.co/Cd84K1g2sq pic.twitter.com/OW6H1LeW5K

The police also issued a statement:

(Ottawa) – The Ottawa Police Service is seeking the public’s help in identifying two individuals as persons of interest in the investigation of an arson.

The incident occurred in the early morning hours of February 6, 2022, at a building in the 200 block of Lisgar Street. It’s believed that one or more persons entered the building and started a fire using undisclosed materials. The fire caused minor damage but thankfully no injuries occurred.

Information can also be submitted anonymously by calling Crime Stoppers toll-free at 1-800-222-8477, or by visiting www.crimestoppers.ca.

If anyone out there recognizes these two individuals, they are strongly urged to contact police.

The only thing we don’t know for sure is if the perpetrators are actually part of the convoy. One said that he was to the tenant, but obviously, motives can’t be confirmed even though there is evidence to suggest that this was retaliation over a noise complaint against the convoy. Suggestive, though technically not conclusive.

Still, whether or not you believe they were actually convoy protesters, this is clear evidence that things have escalated far out of control and it is evidence that the occupation needs to end. We are all lucky that this didn’t end with casualties.