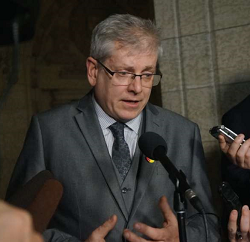 The NDP, who previously supported it, then opposed it, is now, once again, supporting Bill C-11.

Shortly after the CRTC chair admitted that Bill C-11 regulates user generated content, the Canadian government responded by demanding that everyone just shut the [blank] up and pass the bills. Since then, they’ve been doing everything to limit debate and ram through both Bill C-11 and Bill C-18. This despite knowing full well what the repercussions are.

While Liberal corruption isn’t exactly a big surprise in Canadian politics, the NDP’s performance in all of this has arguably been the biggest disappointment throughout these debates. Up until the last government, the NDP had actually been an effective supporter of digital rights. They have a long history of railing against both the Conservative and Liberal governments when they tried to crack down on the Internet. This as seen in the Canadian DMCA and Lawful Access debates of old. So, for roughly a decade, they built their reputation up as the party that will support the rights of Canadian’s.

All that changed during the last government. Somewhere along the line, the party had effectively taken their principles when it came to Internet and digital rights and took those to the back of the woodshed. In its place, the NDP had become an opportunistic party that will do anything if it meant short term political gain – consequences be damned. During the last government, the NDP felt that it could gain seats in Quebec if it just sold the whole Internet down the river. In response, they voted against free speech and moved the then-called Bill C-10 further along the process.

After the election hit, their flip-flop on freedom of expression resulted in no real gains in Quebec. It meant that their removal of principles got them nothing politically.

So, after the election was over, the party seemed to have had their “hand on the element” learning moment. In response, Charlie Angus, an NDP MP who used to have such a phenomenal track record on these issues, finally broke his silence and called Bill C-10 a “dumpster fire“. While the damage was already done, the moment represented a positive development that maybe, just maybe, the NDP had finally returned to their senses, flip-flopping on the issue and returning to the right side of history.

Well, shortly after the election, the NDP and Liberal parties then entered into a supply and confidence deal. The agreement being that the NDP would support the Canadian government on confidence votes in exchange for moving forward with key NDP priorities. Now, things like Bill C-11 and Bill C-18 are not confidence votes. The NDP did say that if they didn’t think the legislation moved forward is good for Canada, then they would not vote for it. So, in that light, there was no reason to believe that the NDP had to support both bills.

Now, we are learning that the NDP has, once again, flip-flopped on the issue. According to recent voting records, the NDP, including Angus, has voted to move Bill C-11 forward.

Not one NDP member voted against this legislation. The moment marks yet another flip-flop for the NDP – likely thanks to the supply and confidence deal. Still, this represents yet another moment where the NDP has sold its principles of being supportive of free speech down the river in favour of whatever political gains they feel they can make in the here and the now. As a result, it’s easy to conclude that the NDP has become little more than a husk of what used to be a party with principles. Now, they are just like any other corrupt political party operating at the Federal level: do what is in the interest of the party, the Interest of Canadians is pretty much meaningless.